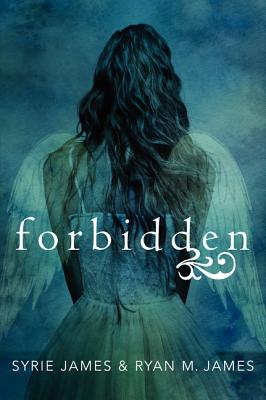 A romantic and endearing novel perfect for fans of Rachel Vincent, Julie Kagawa, and Alyson Noel, from bestselling author Syrie James and her son, Ryan M. James, Forbidden is book one in an exciting paranormal romance series.

When Claire Brennan begins to get psychic visions and mysterious warnings that she’s in danger at the start of her junior year of high school, she isn’t sure what to think. But the truth is stranger than anything she could have imagined.

Alec MacKenzie has fled his duties as a Watcher angel and come to L.A. in search of normalcy. He never dreamed he would find a half-angel at his school, or that he would fall in love with her—a relationship that is strictly forbidden for his kind.

Romantic and suspenseful, with a touch of humor, readers will be swept away by this thrilling novel from bestselling adult author Syrie James (The Lost Memoirs of Jane Austen) and her son, Ryan M. James. Claire and Alec’s story continues in book two, Embolden.

“Both main characters are well–drawn, with believable motivations and reactions to their situations.” — School Library Journal

“Hits all the right notes…If you enjoy angels, ‘forbidden’ romance and dashing heroes, then this should be added to your TBR.” — USA Today

Aside from being Syrie’s firstborn, Ryan M. James has co­written two screenplays, directed an independent feature, and created the machinima webseries A Clone Apart. By day he works as an editor for the video game industry in Santa Monica, most recently on Uncharted 2: Among Thieves (Game of the Year 2009) and Uncharted 3: Drake’s Deception. Under cover of night, he conjures stories for print, screen, and web as a member of the Writers Guild of America. He and his wife live in Los Angeles about a stone’s throw away from Syrie.