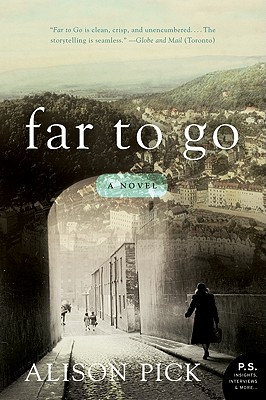 "[A]nuanced and layered portrait of betrayal. . . . The strength of Far to Golies in Pick's ability to show precisely why one person could turn on another,how a single word spoken on impulse could have devastating results." —MontrealGazette

Alison Pick, acclaimed author of The Sweet Edge, delivers the moving and suspenseful story of an affluentJewish family in Czechoslovakia at the onset of World War II, and the governesswho forever alters their future when she seeks shelter in their midst.Interwoven with a present-day narrative revealing each character’s fates after thewar, Far to Go is an emotionallyvivid, masterfully wrought narrative that the Montreal Gazette calls, "an intriguing experiment in the art ofstorytelling."

In Far To Go,  Pavel and Anneliese Bauer are presented with an impossible choice. They must either send their young son away to strangers in a far away land, or else risk the political consequences of keeping him with them.  Do you think they made the right decision? What would you have done in their situation?

Far To Go is told from the perspective of Marta, who is governess to the young Pepik. Why do you think the author chose Marta as the narrator? Is she reliable or unreliable? What perspective does she offer that the Bauers themselves do not?

What roles do Sophie and Ernst play in the Bauers’ story? Why are they included? How are they different from the other characters? How are they the same?

While the vast majority of Jews are scrambling to get out of Czechoslovakia in early 1939, Pavel Bauer refuses to leave, and clings to his homeland. Why does he do this? Is it realistic? What would you do if you were him?

Marta reveals a secret to Ernst that ultimately costs the Bauers their lives. Why does she do this? What kind of background do you think she comes from? How does her own family history influence her actions in the present?

The Bauers’ story is interspersed with segments from a modern-day narrator whose identity is slowly clarified over the course of the book. Did this mediating voice add to or detract from the principal storyline? When and how did you realize who the voice belonged to?

The ‘Kindertransport’ section of Far To Go  is told from Pepik’s perspective. In what other ways is this section unique? How did it affect you to hear a child’s point of view so late in the book?

The ending of Far To Go reveals an unexpected plot twist. What was your reaction to learning that the historical events had actually been written by the modern-day narrator? Did you expect this?

What genre does Far To Go fall under? Mystery? Romance? Historical Fiction?

If Far To Go  is made into a Hollywood movie, who should play Marta? What about the other characters (Pavel, Anneliese, Pepik, Ernst, Sophie, and Lisa)?