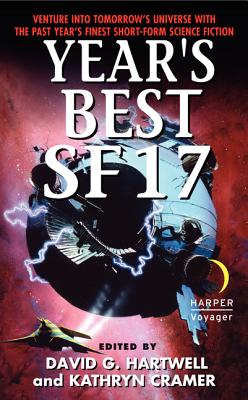 The Year’s Best SF 17 is a showcase of the best short form science fiction of 2011, selected by World Fantasy Award winners David Hartwell and Kathryn Cramer, two of the most respected editors in the field of speculative fiction.  Like the previous sixteen volumes of the series that has been called “the finest modern science fiction writing,” The Year’s Best SF 17 features stories from some of the brightest lights in sf—including Gregory Benford (Beyond Human), Nancy Kress (Beggars in Spain), James Morrow (The Philosopher’s Apprentice), Michael Swanwick (The Dragons of Babel) and Neil Gaiman (American Gods) —as well as electrifying short stories from exciting newcomers.