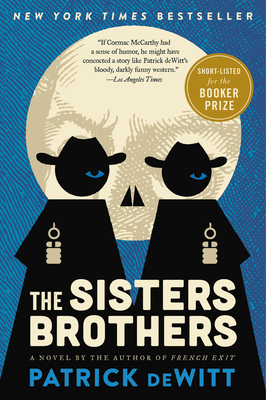 “This is a modern take on the Old West that is part classic Western, part Coen Brothers, part Homer's Odyssey, and part murder ballad. This wry, weird, and wonderful tale tells of hitmen Eli and Charlie Sisters as they meet funny and tragic characters on their journey to kill a man. Along the way, Eli examines both what has brought him to this point and the violent world around him. As with many adventures, that of the Sisters Brothers is really a quest to find some kind of home.”
— Steven Salardino, Skylight Books, Los Angeles, CA
View the List

“This is a modern take on the Old West that is part classic Western, part Coen Brothers, part Homer's Odyssey, and part murder ballad. This wry, weird, and wonderful tale tells of hitmen Eli and Charlie Sisters as they meet funny and tragic characters on their journey to kill a man. Along the way, Eli examines both what has brought him to this point and the violent world around him. As with many adventures, that of the Sisters Brothers is really a quest to find some kind of home.”
— Steven Salardino, Skylight Books, Los Angeles, CA
View the List

Hermann Kermit Warm is going to die. The enigmatic and powerful man known only as the Commodore has ordered it, and his henchmen, Eli and Charlie Sisters, will make sure of it. Though Eli doesn’t share his brother’s appetite for whiskey and killing, he’s never known anything else. But their prey isn’t an easy mark, and on the road from Oregon City to Warm’s gold-mining claim outside Sacramento, Eli begins to question what he does for a living-and whom he does it for.

With The Sisters Brothers, Patrick deWitt pays homage to the classic Western, transforming it into an unforgettable comic tour de force. Filled with a remarkable cast of characters-losers, cheaters, and ne’er-do-wells from all stripes of life-and told by a complex and compelling narrator, it is a violent, lustful odyssey through the underworld of the 1850s frontier that beautifully captures the humor, melancholy, and grit of the Old West and two brothers bound by blood, violence, and love.


Praise For The Sisters Brothers…

“[A]n odd gem...that has one of most engaging and thoughtful narrators I’ve come across in a long time....The novel belongs to the great tradition of subversive westerns...but deWitt has a deadpan comic voice and a sneaky philosophical bent that’s all his own.” — Tom Perrotta's Favorite Fiction of 2011 on Salon.com

“This bloody buddy tale of two hired guns during the Gold Rush is weirdly funny, startlingly violent and steeped in sadness — a reaffirmation of the endurance of the Western.” — Notable Fiction of 2011, Washington Post

“DeWitt’s THE SISTERS BROTHERS is a glorious picaresque Western; everything about this book is stylish, from its conceit to its cover design making it a truly worthy inclusion on the shortlist.” — Daily Beast

“If Cormac McCarthy had a sense of humor, he might have concocted a story like Patrick DeWitt’s bloody, darkly funny western THE SISTERS BROTHERS...[DeWitt has] a skillfully polished voice and a penchant for gleefully looking under bloody bandages.” — Los Angeles Times

“Thrilling…a lushly voiced picaresque story…so richly told, so detailed, that what emerges is a weird circus of existence, all steel shanks and ponies, gut shots and medication poured into the eyeholes of the dying. At some level, this too is a kind of revenge story, marvelously blurry.” — Esquire

“[T]here’s something cinematic about Mr. deWitt’s unadorned prose style, which at first made this reader do a double-take—can this be serious?—only to continue flicking the pages with pleasure.” — Wall Street Journal

“By turns hilarious, graphic and meditative, The Sisters Brothers hooked me from page one all the way to 300 — and I could have stayed on for many more.” — NPR.org

“Wandering his Western landscape with the cool confidence of a practiced pistoleer, deWitt’s steady hand belies a hair trigger, a poet’s heart and an acute sense of gallows humor…the reader is likely to reach the adventure’s end in the same shape as Eli: wounded but bettered by the ride.” — Time Out New York

“A feast of delights in short punchy chapters.... Deliciously original and rhapsodically funny, this is one novel that ropes you in on page one, and isn’t about to ride off into the sunset any time soon.” — Boston Globe

“Mesmerizing… The book seduces us to its characters, and draws us on the strength of deWitt’s subtle, nothing-wasted prose. He writes with gorgeous precision about the grotesque: an amputation, a gouged eye, a con in a dive bar, a nauseating body count [without] macho brutishness.” — Cleveland Plain Dealer

“DeWitt’s exploitations of the picaresque form are striking, and he has a wonderful way of exercising his comic gifts without ever compromising the novel’s gradual accumulation of darkness, disgust, and foreboding.” — The Millions

“A gorgeous, wise, riveting work of, among other things, cowboy noir….Honestly, I can’t recall ever being this fond of a pair of psychopaths.” — David Wroblewski, bestselling author of The Story of Edgar Sawtelle

“[THE SISTERS BROTHERS] is full of surprises, among them…is the quirky beauty of the language Patrick deWitt has devised for his narrator.... THE SISTERS BROTHERS is deWitt’s second novel…and is an inventive and ingenious character study. It will make you impatient for the third.” — Dallas Morning News

“Weirdly funny, startlingly violent and steeped in sadness… It’s all rendered irresistible by Eli Sisters, who narrates with a mixture of melancholy and thoughtfulness.” — Washington Post

“Funny and strange [and] oddly warm…you’ll find yourself ashamedly pulling for the brothers Sisters like you did for Jules and Vinnie in Pulp Fiction.” — Outside magazine

“A bright, brutal revision of the Western, The Sisters Brothers offers an unexpected meditation on life, and on the crucial difference between power and strength.” — Gil Adamson, author of The Outlander

“At once dark and touching, The Sisters Brothers has something on every page to make you laugh. Patrick deWitt has given us a gift, reimagining the old west in a thoroughly original manner. Readers are all the better for it.” — Charles Bock, New York Times bestselling author of Beautiful Children

“…gritty, as well as deadpan and often very comic…DeWitt has chosen a narrative voice so sharp and distinctive…it’s very narrowing of possibilities opens new doors in the imagination.” — New York Times Book Review

“A masterful, hilarious picaresque that keeps company with the best of Charles Portis and Mark Twain, The Sisters Brothers is a relentlessly absorbing feat of novelistic art.” — Wells Tower, author of Everything Ravaged, Everything Burned

Patrick deWitt is the author of the novels French Exit (a national bestseller), The Sisters Brothers (a New York Times bestseller short-listed for the Booker Prize), and the critically acclaimed Undermajordomo Minor and Ablutions. Born in British Columbia, he now resides in Portland, Oregon.