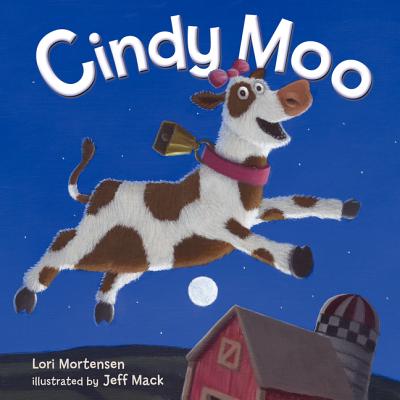 One night on the farm, the cows overhear a fantastic tale.

“Hey Diddle Diddle, the cat and the fiddle, the cow jumped over the moon!”

Inspired by this classic rhyme, a plucky cow named Cindy Moo sets out to prove that cows really can leap over the moon.

The other cows laugh at her, but that doesn’t stop Cindy from trying—and failing—night after night . . . until a trick of nature shows Cindy a way to triumph.

As delightfully silly as the original nursery rhyme, this hilarious picture book will have readers of all stripes (and spots) cheering for its determined heroine.

Lori Mortensen is the author of Come See the Earth Turn: The Story of Léon Foucault and several other books for young readers. She lives in Northern California with her husband and three children.

Jeff Mack spent most of his childhood drawing monsters, making comic books, and building haunted houses in his basement. He has spent most of his adulthood doing the same things. Since 2003, he has written and illustrated a long list of award-winning picture books, chapter books, and early readers, including the Clueless McGee series, Good News, Bad News; Hush Little Polar Bear; Duck in the Fridge; and Frog and Fly. He has also illustrated many books for other authors, including James Howe’s Bunnicula and Friends series and Eve Bunting’s Hurry! Hurry! At home in Northampton, Massachusetts, he travels both nationally and internationally visiting schools and libraries to talk with kids about creating books.