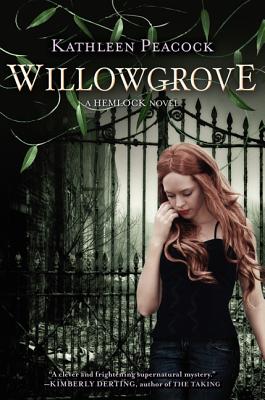 Ever since Mac’s best friend, Amy, was murdered, Hemlock has been a dangerous place. But now that Mac, her boyfriend, Kyle, and Amy’s ex, Jason, instigated a mass breakout from Thornhill, a werewolf “rehabilitation” camp, the danger has only grown. Fear of the infection spreading is now at an all-time high and anyone with a scar is suspected of being a wolf.

What makes Mac even more afraid, though, are the dark experiments that the warden of Thornhill was performing on wolves in a secret asylum called Willowgrove. Uncovering the truth about what happened may be the only way for Mac to save everyone she loves and end her nightmares for good.


Praise For Willowgrove (A Shifters Novel #3)…

“The Hemlock series winds to a cathartic close with a high body count. This series is smart enough to outlast and werewolf-specific fiction craze.”
— Booklist

PRAISE FOR THE HEMLOCK SERIES: “Seamless writing and plenty of action mark this intelligent, dark debut. Fans will likely clamor for the next book in this planned series.”
— Booklist

“Jacob fans rejoice: Peacock’s debut is loaded with werewolves both creepy and hot. A satisfying conclusion to this plot arc, and Mac’s smart and believable voice will leave readers looking forward to more.”
— Publishers Weekly

“A clever and frightening supernatural mystery, HEMLOCK had me biting my nails with anticipation.”
— Kimberly Derting, author of The Taking

“A riveting romance and a thrilling mystery, HEMLOCK is the werewolf story done right. I devoured it in one sitting and am ravenous for more! A fantastic start to a compelling new trilogy.”
— Sarah Beth Durst, author of Conjured

“A werewolf tale filled with hurtling action, searing emotion, and enough twists to keep readers glued to the page until the final breathless scene.”
— Sophie Littlefield, award-winning author of Banished and Unforsaken

“Mac and the other characters explore serious issues such as trust and betrayal, prejudice, and identity, in ways that teens will recognize. A good purchase for fans of the supernatural.”
— Voice of Youth Advocates (VOYA)

“Peacock hold[s] readers with an intense love triangle. Will be enjoyed by fans of Maggie Stiefvater and Stephenie Meyer.”
— School Library Journal

Kathleen Peacock spent most of her teen years writing short stories—all of which contained much angst and none of which survived high school. After working as a graphic designer, unofficial technical writer, and publicist, she returned to school to pursue an undergraduate degree. She lives in New Brunswick, Canada—just a few hours from the border with Maine—and is the author of You Were Never Here and the Hemlock series. You can visit her at www.kathleenpeacock.com.