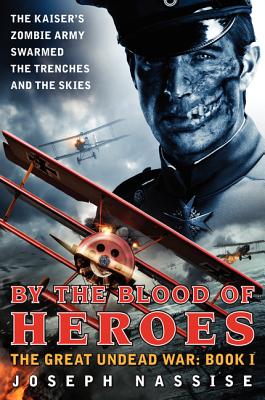 By the Blood of Heroes

The Great Undead War: Book I

Combine the take-no-prisoners heroic grit of Quentin Tarantino’s Inglorious Basterds with the irreverent inventiveness of George A. Romero’s Dawn of the Dead, set it on the blood-and-gore-soaked European battlefields of World War One, and you get By the Blood of Heroes, a wildly imaginative alternate history zombie novel by acclaimed urban fantasy author Joseph Nassise. When the German high command employs a terrible new chemical weapon that reanimates the dead, Allied forces must take on the Kaiser’s zombie army in order to rescue a downed American flying ace in the first book of Nassise’s The Great Undead War saga. By the Blood of Heroes is a deliciously gruesome adventure that horror and alternate history lovers, steampunk aficionados, and fans of such zombie-centric offerings as TV’s The Walking Dead, popular literature’s World War Z, Pride and Prejudice and Zombies, and Zombie Haiku, and the Resident Evil video game and film series will eagerly devour.


Praise For By the Blood of Heroes: The Great Undead War: Book I…

“Urban fantasy and sf author Nassise­ (Eyes To See) raises the alternate history genre to brilliant new heights. This is a treat for zombie and horror fans, military fiction aficionados, history buffs, and steampunk lovers alike, all of whom will be clamoring for the next installment.”
— Library Journal

“I would argue Joseph Nassise is the most important thing to happen to zombies since Max Brooks, and that’s no hyperbole. He’s really that good.”
— Joe McKinney, author of Dead City and Flesh Easters

Joseph Nassise is the author of more than twenty novels, including the internationally bestselling Templar Chronicles series, the Jeremiah Hunt series, and several books in the Rogue Angel action/adventure series from Gold Eagle. He’s a former president of the Horror Writers Association, the world’s largest organization of professional horror writers, and a multiple Bram Stoker Award and International Horror Guild Award nominee.