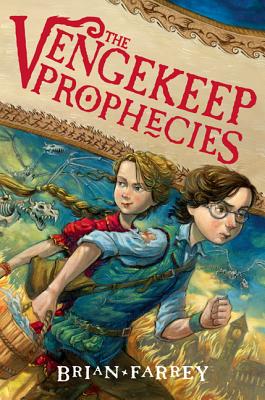 Forget what you know about prophecies—this epic middle-grade fantasy about a clumsy boy born into a family of thieves is fresh, fun, and anything but predictable! The first in an unforgettable trilogy, this Kirkus Reviews Best Children's Book of the Year takes everything you thought you knew about fantasy and spins it into pure magic.

Jaxter Grimjinx is a born thief. At least, he's supposed to be. For generations, the Grimjinx clan has produced the swiftest, cleverest thieves in Vengekeep. The problem is, Jaxter is clumsy. So clumsy that in his first solo heist, he sets the Castellan's house on fire and lands his family in prison. Even Jaxter's talent for breaking magical locks can't get them out of this bind.

Then a suspiciously convenient prophecy emerges, naming the Grimjinx clan as the soon-to-be heroes of Vengekeep. It's good enough to get his family out of jail, but when the doomsday prophecy starts to come true, Jaxter is pretty sure a life behind bars would be a better fate. Now, with the help of his new friend, Callie, Jaxter will have to face down flaming monsters, a bazaar of thieves, and a renegade sorcerer to become the hero he was truly born to be.

Full of twists and turns, friendship and adventure, The Vengekeep Prophecies is a "rich fantasy that hits the ground running and never lets up" (Publishers Weekly, starred review).


Praise For The Vengekeep Prophecies…

“Rollicking. Highly accessible. Jaxter is as heroic as the early Harry [Potter], but he has a loving family, which makes a big difference in his ability to trust his own instincts as he works for the community’s greater good. Readers will hope for a continuation of the story.”
— ALA Booklist

“A charming story that’s at times laugh-out-loud funny but also a satisfying fantasy, offering a magical world that will strike a chord with fans of the Harry Potter series.”
— Bulletin of the Center for Children’s Books