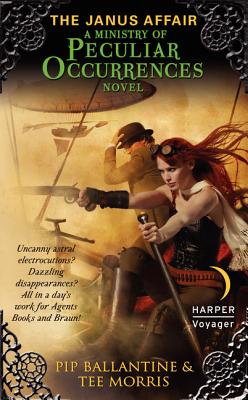 Hang onto your bowler hats, agents Books and Braun of Britain’s top-secret Ministry of Peculiar Occurrences are back in The Janus Affair. In their second wildly imaginative, utterly fantastic steampunk adventure, authors Pip Ballantine and Tee Morris carry readers back to an alternate history Edwardian England, where suffragettes are inexplicably disappearing in flashes of lightning, and the brainy, intrepid Mr. Books and his partner, the fearless, lovely, weapons-loving Eliza Braun, must get to the bottom of the nefarious matter—while confronting high-flying assassins, a traitorous turncoat, and the Queen of the Underworld herself. The Janus Affair is the British TV classic, The Avengers, updated for the 21st Century and given a delectable steampunk twist—an Affair that will satisfy fantasy lovers, graphic novel aficionados, and dedicated fans of the novels of Gail Carriger.

Born in New Zealand, Philippa (Pip) Ballantine has always had her head in a book. A corporate librarian for thirteen years, she has a Bachelor of Arts in English and a Bachelor of Applied Science in Library and Information Science. She is New Zealand's first podcast novelist and has produced four podiobooks. Many of these have been shortlisted for the Parsec Awards, and she has won a Sir Julius Vogel Award. She is also the author of Geist and the soon-to-be-published Spectyr. While New Zealand calls, currently Philippa calls America home.

While Tee Morris began his writing career with Dragon Moon Press's 2002 historical epic fantasy Morevi: The Chronicles of Rafe and Askana, it is his podcast of that book and works such as Podcasting for Dummies and All a Twitter that have earned him the distinction as one of the pioneers of social media. With Phoenix Rising, Tee returns to where he prefers to be—his imagination. When he is not there, Tee lives in the Washington, D.C. area with his five cats and one daughter, all of whom have him very well-trained.