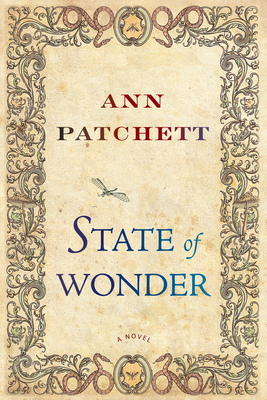 “When Marina Singh receives a note that her office mate, Anders Eckman, has died in the Amazon while investigating scientific work on female fertility, she is persuaded to follow him into the jungle in search of the doctor with whom he worked - who has also exerted a crucial influence on Marina's life - and to retrieve Anders' personal effects. This spellbinding, richly atmospheric novel raises ethical questions about scientific research and discovery, loyalty, honesty, and love. Not to be missed!”
— Tova Beiser, Brown University Bookstore, Providence, RI
View the List

“When Marina Singh receives a note that her office mate, Anders Eckman, has died in the Amazon while investigating scientific work on female fertility, she is persuaded to follow him into the jungle in search of the doctor with whom he worked -- who has also exerted a crucial influence on Marina's life - and to retrieve Anders' personal effects. This spellbinding, richly atmospheric novel raises ethical questions about scientific research and discovery, loyalty, honesty, and love. Not to be missed!”
— Tova Beiser, Brown University Bookstore, Providence, RI
View the List

“Extraordinary. . . . Nothing is as it seems, and the ending is as shocking as it’s satisfying.” — Boston Globe

From award-winning, New York Times bestselling author Ann Patchett, a provocative and assured novel of morality and miracles, science and sacrifice set in the Amazon rainforest

In a narrative replete with poison arrows, devouring snakes, scientific miracles, and spiritual transformations, State of Wonder presents a world of stunning surprise and danger, rich in emotional resonance and moral complexity.

As Dr. Marina Singh embarks upon an uncertain odyssey into the insect-infested Amazon, she's forced to surrender herself to the lush but forbidding world that awaits within the jungle. Charged with finding her former mentor Dr. Annick Swenson, a researcher who has disappeared while working on a valuable new drug, she will have to confront her own memories of tragedy and sacrifice as she journeys into the unforgiving heart of darkness.

Stirring and luminous, State of Wonder is a world unto itself, where unlikely beauty stands beside unimaginable loss beneath the rain forest's jeweled canopy. Patchett delivers a gripping adventure story and a profound look at the difficult choices we make in the name of discovery and love.


Praise For State of Wonder: A Novel…

“Emotionally lucid. . . . Patchett is at her lyrical best when she catalogues the jungle.” — The New Yorker

“This is surely the smartest, most exciting novel of the summer.” — Washington Post

“The Amazon setting is something Patchett does rather marvelously.… The book is serious, but also so pleasurable that you hope it won’t end.” — NPR

“Packs a textbook’s worth of ethical conundrums into a smart and tidily delivered story. . . . Ms. Patchett presents an alluring interplay between civilization and wilderness, between aid and exploitation.” — Wall Street Journal

“The large canvas of sweeping moral issues, both personal and global, comes to life through careful attention to details, however seemingly mundane—from ill-fitting shoes and mosquito bites to a woman tenderly braiding another woman’s hair.” — O, the Oprah Magazine

“A superbly rendered novel. . . . Patchett’s portrayal is as wonderful as it is frightening and foreign. Patchett exhibits an extraordinary ability to bring the horrors and the wonders of the Amazon jungle to life, and her singular characters are wonderfully drawn. . . . Powerful and captivating.” — Library Journal (starred review)

“A thrilling new novel. . . . The world imagined in this novel is unusually vivid. . . . Reading State of Wonder is a sensory experience, and even after it’s over you’ll keep hearing the sounds of insects, and your own head will still be hot.” —

“A thrilling new novel. . . . The world imagined in this novel is unusually vivid. . . . Reading State of Wonder is a sensory experience, and even after it’s over you’ll keep hearing the sounds of insects, and your own head will still be hot.” — MORE Magazine

“Patchett makes the jungle jump off the page…This is Patchett’s best effort since The Patron Saint of Liars and, yes, that includes Bel Canto” — Shelf Awareness

“Extraordinary. . . . Is there nothing the prodigiously talented Ann Patchett can’t do? . . . Patchett’s last knockout pages proceed full-speed ahead, with more twists and turns and trachery than the Amazon River. Nothing is as it seems, and the ending is as shocking as it’s satisfying.” — Boston Globe

Ann Patchett is the author of eight novels, four works of nonfiction, and two children's books. She has been the recipient of numerous awards, including the PEN/Faulkner, the Women's Prize in the U.K., and the Book Sense Book of the Year. Her most recent novel, The Dutch House, was a finalist for the Pulitzer Prize. Her work has been translated into more than thirty languages. TIME magazine named her one of the 100 Most Influential People in the World. She lives in Nashville, Tennessee, where she is the owner of Parnassus Books.

1. How would you describe Marina Singh? How has the past shaped her character? Discuss the anxieties that are manifested in her dreams.

2. “Marina was from Minnesota. No one ever believed that. At the point when she could have taken a job anywhere she came back because she loved it here. This landscape was the one she understood, all prairie and sky.” What does this description say about the character?

3. Talk about Marina’s relationship with her boss, Mr. Fox. Would you call what they share love? Do they have a future? Why does he want Marina to go to the Amazon? What propels her to agree?

4. What drew Marina to her old mentor, Annik Swenson? Compare and contrast the two women. How does Annick see Marina? Barbara Bovender, one of Annik’s caretakers/gatekeepers tells Marina, “She’s such a force of nature. . . . a woman completely fearless, someone who sees the world without limitations.” Is this a fair assessment of Annik? How would you describe her? How has the elderly doctor’s past shaped the person she is and the choices she has made?

5. Describe the arc of Marina and Annik’s relationship from the novel’s beginning to its end. Do you like these women? Did your opinion of them change as the story unfolded? Why didn’t Marina ever tell anyone the full story of her early experience with Annick?

6. Consider Annik’s research in the Amazon. Should women of any age be able to have children? What are the benefits and the downsides? Why does this ability seem to work in the Lakashi culture? What impact does this research ultimately have on Marina? Whether you are a man or woman, would you want to have a child in your fifties or sixties? How far should modern science go to “improve” on nature?

7. In talking about her experiences with the indigenous people, Annik explains, “the question is whether or not you choose to disturb the world around you; or if you choose to go on as if you had never arrived. “ How does Marina respond to this? Did Annik practice what she preached? How do these women’s early choices impact later events and decisions? How does Annik’s statement extend beyond the Amazon to the wider world? Would you rather make a “disturbance” in life, or go along quietly?

9. Would you be able to live in the jungle as the researchers and natives do? Is there an appeal to going back to nature; from being removed from the western constraints of time and our modern technological society?

10. What role does nature and the natural world—the jungle, the Amazon River—play in Marina’s story? How does the environment influence the characters—Marina, Annik, Milton, Anders, Easter, and the others? Annik warns Marina, “It’s difficult to trust yourself in the jungle. Some people gain their bearings over time but for others that adjustment never comes.” Did Marina ultimately “gain her bearings”?

11. Marina travels into hell, into her own Conradian “heart of darkness.” What keeps her in the jungle longer than she’d ever thought she’d stay? How does this journey transform her and her view of herself and the world? Will she ever return—and does she need to?

12. What is your opinion of the choices Marina made regarding Easter? What role did the boy play in the story? Do you think Marina will ever have the child—one like Easter—that she wants?

13. What do you think happens to Marina after she returns home?

15. State of Wonder raises questions of morality and principle, civilization, culture, love, and science. Choose a few events from the book to explore some of these themes.

16. What is the significance of the novel’s title, State of Wonder?