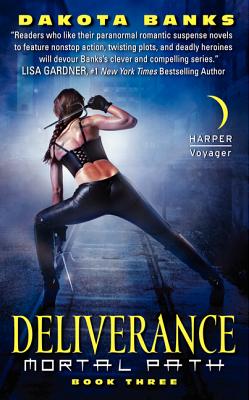 “A gut-kick of a read, with non-stop action and as inventive a world as I’ve ever seen.”
—Vicki Pettersson, New York Times bestselling author of the Signs of the Zodiac series

“Great characters who jump from the page; a smart, layered plot, and pacing that screams. This is the kind of book that makes you look forward to a rainy day.”
—John Gilstrap, author of Nathan’s Run

Dakota Banks has taken the supernatural thriller and given it a breathtaking new twist! Deliverance is the third book in Banks’s relentlessly exciting urban fantasy series, Mortal Path, featuring heroine Maliha Crayne, once a demon’s henchwoman and paranormal assassin now determined to atone for her centuries of murderous acts. A cross between Tomb Raider’s Lara Croft and Marvel Comics’s Elektra, Maliha finds her powers are rapidly fading in Deliverance, and discovers that her quest to avoid eternal damnation has put those she loves most in gravest peril. Banks’s Deliverance delivers suspense and edge-of-your-seat adventure—a non-stop paranormal roller coaster ride that fans of Jeaniene Frost, James Rollins, Vicki Pettersson, and Indiana Jones, won’t want to miss.

“Edge of your seat, breathtaking action in a must-read supernatural thriller.” — David Dun, author of The Black Silent

“A passionate, fascinating story packed with action and history. Three hundred years ago, Maliha Crayne was burned at the stake. Now she’s in a race against time to save the world and her soul, and you’ll be with her step by step.” — David Morrell, New York Times bestselling author of The Brotherhood of the Rose

“THE MORTAL PATH is a novel to be savored for both its edge of suspense and the pure joy of its storytelling. Part immortal, all human, Maliha is a heroine who will leave readers breathless and craving more. Not to be missed!” — James Rollins, New York Times bestselling author of Map of Bones and Black Order

“Sweeping across continents and centuries, THE MORTAL PATH by Dakota Banks is story-telling at its most vivid. The characters are fascinating, the plot nail-biting, and the period pieces memorable. Curl up in your favorite chair - entertainment is guaranteed.” — Gayle Lynds, New York Times bestselling author of The Last Spymaster

“Fans of supernatural and dark fantasy will be intrigued by Maliha Crayne’s quest to save her soul.” — Publishers Weekly

“DELIVERANCE is a gut-kick of a read, with non-stop action and as inventive a world as I’ve ever seen. Maliha Crayne, not a character to be trifled with, could give other Urban Fantasy heroines a pointed lesson in real ass-kicking.” — Vicki Pettersson, author of the bestselling Signs of the Zodiac series on DELIVERANCE

“DELIVERANCE by Dakota Banks delivers everything I love in suspense fiction: great characters who jump from the page; a smart, layered plot, and pacing that screams. This is the kind of book that makes you look forward to a rainy day.” — John Gilstrap, author of NATHAN'S RUN and DAMAGE CONTROL

“A breakneck ride through worlds visible and invisible - who knew the ancient Sumerians were this thrilling?” — Joseph Finder, NYT bestselling author of BURIED SECRETS

Growing up in a converted 1890s funeral home, complete with blood gutters in the basement floor, fueled Dakota Banks' interest in the paranormal. She's no ghost whisperer, but she keeps an open mind. She's fascinated with both archaeology and the paranormal, especially when the two intersect, as they do in Mortal Path.

Dakota is a member of the Horror Writers Association and the International Thriller Writers. She lives in a St. Louis suburb with her husband, two sons adopted from Peru and Ethiopia, and a couple of cats who keep her writing on track.
Loading...
or
Not Currently Available for Direct Purchase