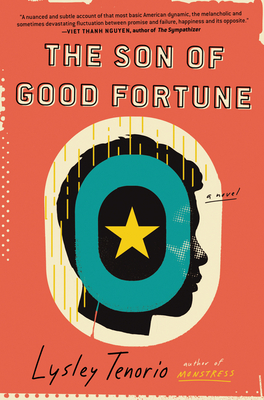 The Son of Good Fortune (Hardcover)

From award-winning author Lysley Tenorio, comes a big hearted debut novel following an undocumented Filipino son as he navigates his relationship with his mother, an uncertain future, and the place he calls home

Excel spends his days trying to seem like an unremarkable American teenager. When he’s not working at The Pie Who Loved Me (a spy-themed pizza shop) or passing the time with his girlfriend Sab (occasionally in one of their town’s seventeen cemeteries), he carefully avoids the spotlight.

But Excel knows that his family is far from normal. His mother, Maxima, was once a Filipina B-movie action star who now makes her living scamming men online. The old man they live with is not his grandfather, but Maxima’s lifelong martial arts trainer. And years ago, on Excel’s tenth birthday, Maxima revealed a secret that he must keep forever. “We are ‘TNT’—tago ng tago,” she told him, “hiding and hiding.” Excel is undocumented—and one accidental slip could uproot his entire life.

Casting aside the paranoia and secrecy of his childhood, Excel takes a leap, joining Sab on a journey south to a ramshackle desert town called Hello City. Populated by drifters, old hippies, and washed-up techies—and existing outside the normal constructs of American society—Hello City offers Excel a chance to forge his own path for the first time. But after so many years of trying to be invisible, who does he want to become? And is it possible to put down roots in a country that has always considered you an outsider?

Thrumming with energy and at once critical and hopeful, The Son of Good Fortune is a luminous story of a mother and son testing the strength of their bond to their country—and to each other.

Lysley Tenorio is the author of the novel The Son of Good Fortune and the story collection Monstress, named a book of the year by the San Francisco Chronicle. He is the recipient of a National Endowment for the Arts fellowship, a Whiting Award, a Stegner fellowship, and the Rome Prize from the American Academy of Arts and Letters, as well as residencies from the MacDowell Colony, Yaddo, and the Bogliasco Foundation. His stories have appeared in the Atlantic, Zoetrope: All-Story, and Ploughshares, and have been adapted for the stage by The American Conservatory Theater in San Francisco and the Ma-Yi Theater in New York City. He is a professor at Saint Mary’s College of California.


Praise For The Son of Good Fortune: A Novel…

“Lysley Tenorio's The Son of Good Fortune is flat-out brilliant, and what makes it so wondrous is how Tenorio controls the complexity of the narrative. How can a book be filled with so much humor, such a light touch, and yet still touch that weird place in our heart that can break us apart? Excel and his mother, Maxima, are characters you won't forget, and the world in which they exist, stuck between belonging and not belonging, does not deserve them.”
— Kevin Wilson, author of Nothing to See Here

“Full of heart, wisdom, and humor, The Son of Good Fortune is an unforgettable novel of mothers and sons, secrets and truth, and what it means to belong, told through the story of one undocumented Filipino family.”
— Lisa Ko, author of The Leavers

“This story is bursting with heart and wisdom, humor and hope. Tenorio's gifts as a writer are on display in this expertly constructed, gorgeously written tale of a family haunted by past mistakes, struggling toward the future. Immersive in its rich detail, it gathers momentum to its affecting and powerful conclusion. A remarkable novel by an author I plan to follow for years to come.”
— Charles Yu, author of Interior Chinatown and How To Live Safely in A Science Fictional Universe
or
Pre-Order Now
Copyright © 2020 American Booksellers Association