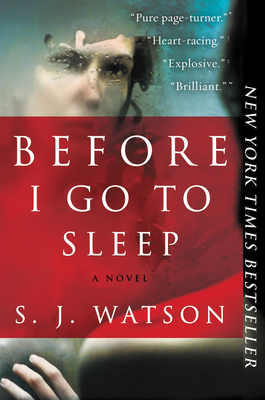 Before I Go to Sleep

“An exceptional thriller. It left my nerves jangling for hours after I finished the last page.”  –Dennis Lehane, New York Times bestselling author of Shutter Island

“Imagine drifting off every night knowing that your memories will be wiped away by morning. That’s the fate of Christine Lucas, whose bewildering internal world is rendered with chilling intimacy in this debut literary thriller. . . . You’ll stay up late reading until you know.”  — People (4 stars)

Memories define us. So what if you lost yours every time you went to sleep? Your name, your identity, your past, even the people you love–all forgotten overnight. And the one person you trust may be telling you only half the story. Welcome to Christine's life. Every morning, she awakens beside a stranger in an unfamiliar bed. She sees a middle-aged face in the bathroom mirror that she does not recognize. And every morning, the man patiently explains that he is Ben, her husband, that she is forty-seven-years-old, and that an accident long ago damaged her ability to remember.

In place of memories Christine has a handful of pictures, a whiteboard in the kitchen, and a journal, hidden in a closet. She knows about the journal because Dr. Ed Nash, a neurologist who claims to be treating her without Ben’s knowledge, reminds her about it each day. Inside its pages, the damaged woman has begun meticulously recording her daily events—sessions with Dr. Nash, snippets of information that Ben shares, flashes of her former self that briefly, miraculously appear.

But as the pages accumulate, inconsistencies begin to emerge, raising disturbing questions that Christine is determined to find answers to. And the more she pieces together the shards of her broken life, the closer she gets to the truth . . . and the more terrifying and deadly it is.


Praise For Before I Go to Sleep: A Novel…

“An exceptional thriller. It left my nerves jangling for hours after I finished the last page.” — Dennis Lehane

“Imagine drifting off every night knowing that your memories will be wiped away by morning. That’s the fate of Christine Lucas, whose bewildering internal world is rendered with chilling intimacy in this debut literary thriller. . . . You’ll stay up late reading until you know.” — People (4 stars)

“The summer’s single most suspenseful plot belongs to BEFORE I GO TO SLEEP. . . . pure page-turner.” — New York Times

“Quite simply the best debut novel I have ever read.” — Tess Gerritsen

“Memories—real, false, and a bit of both—are at the heart of Watson’s haunting, twisted debut…. Watson handles what could have turned into a cheap narrative gimmick brilliantly, building to a chillingly unexpected climax.” — Publishers Weekly (starred review)

“This mesmerizing, skillfully written debut novel works on multiple levels. It is both an affecting portrait of the profound impact of a debilitating illness and a pulse-pounding thriller whose outcome no one could predict.” — Booklist (starred review)

“An intriguingly fresh look at the amnesia-focused psychological thriller. . . . A captivating and highly suspenseful read, populated with believable characters who lead the reader through a taut, well-constructed plot.” — Library Journal

“Watson’s debut novel unwinds as a story that is both complicated and compellingly hypnotic. . . . Watson’s pitch–perfect writing propels the story to a frenzied climax that will haunt readers long after they’ve closed the cover on this remarkable book.” — Kirkus Reviews (starred review)

“A deft, perceptive exploration of a fascinating neurological condition, and a cracking good thriller.” — Lionel Shriver

“Brilliant in its pacing, profound in its central question, suspenseful on every page and satisfying in its thriller ending.” — Anita Shreve

Christine doesn’t feel a strong sense of love for her husband, but wonders if that is normal after so many years of marriage. Do you think it’s inevitable that a marriage changes in this way?

Christine says that feels like an animal. Living from moment to moment, day to day, trying to make sense of the world. Do you think this is what it must be like to be in her situation? Do you think animals really have no sense of their past? Is the abililty to remember years gone by all that separates human beings from animals?

How important is memory to our sense of identity? What are the events in your life that have been important to in shaping who you are? Can you imagine what it might be like if you couldn’t remember them? How would you be different as a person?

Christine can’t remember Adam, or Claire. She can’t remember her wedding day or writing For the Morning Birds. Have these people and things changed her personality anyway, though, even though she can’t remember them? Is not remembering something effectively the same as it not having happened?

What are Dr Nash’s feelings towards Christine? Do you think he is behaving in a professional manner? He says he is writing up her case – are his motives for helping her entirely selfless? Is he being completely honest with her?

Christine believes Ben doesn’t tell her about Adam so that she doesn’t get upset. Would he be right to do this? Or does she have a right to know about him no matter how painful that knowledge might be? Are there other examples of people keeping things from Christine ‘for her own benefit’? Do you think this is ever the right thing to do?

Towards the end of the book Nash calls round at Christine’s house, but she can’t remember asking him to, even though he says she did so earlier that morning. Do you think she did so, but then forgot? Or is Nash lying to cover up the fact he had come uninvited?

Do you think Christine feels like a sexual person? Do you think she would be nervous about sex, and about her own body? Do you think every sexual experience would feel like the first for her? Does her husband have a right to expect her to have sex with him, even if she feels she has never met him before?

Did you like the ending? Did it represent closure for you? What about Christine? Do you think she will remember what happened to her when she wakes up?