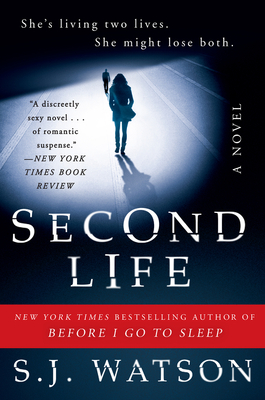 From the New York Times bestselling author of Before I Go to Sleep, a sensational new psychological thriller about a woman with a secret identity that threatens to destroy her.

How well can you really know another person? How far would you go to find the truth about someone you love?

When Julia learns that her sister has been violently murdered, she must uncover why. But Julia's quest quickly evolves into an alluring exploration of own darkest sensual desires. Becoming involved with a dangerous stranger online, she's losing herself . . . losing control . . . perhaps losing everything. Her search for answers will jeopardize her marriage, her family, and her life.

A tense and unrelenting novel that explores the secret lives people lead—and the dark places in which they can find themselves—Second Life is a masterwork of suspense from the acclaimed S. J. Watson.


Praise For Second Life: A Novel…

“Another twisted thriller…from the author of 2011’s best-selling Before I Go to Sleep.”
— Entertainment Weekly, “Must List”

“This book kept me on the edge of my seat.”
— Reese Witherspoon

“The psychological thriller for readers pining of Fifty Shades of Gone Girl.”
— Details

“A gripping read. . . . Ample proof that Watson is no mere one-hit wonder.”
— Independent

“Watson’s many fans will be eager to pick this up.”
— Booklist

“Watson’s second thriller (after the best-selling Before I Go To Sleep) offers an exciting mix of sex, murder, and mystery to please adrenaline junkies.”
— Library Journal (Editor's' Pick)

“What a formidable presence Watson has as a writer: a star is confirmed.”
— Daily Mail (London)

“An extraordinary psychological thriller. The suspense is brilliantly sustained until the shocking conclusion providing an exhilarating reading experience. Edgy and tightly constructed, the clever plot is timely and innovative. Impossible to put down.”
— Fresh Fiction