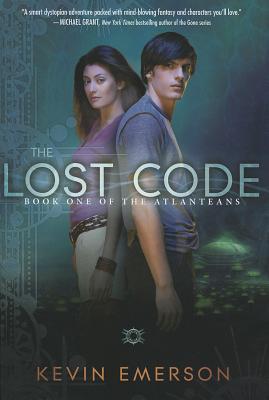 Kevin Emerson’s The Lost Code, first in the Alanteans series, tells the story of a near-future earth ravaged by global climate change. Owen Parker is about to learn that it isn’t the first time the planet has been near destruction. Owen’s ancestors were part of an ancient race whose advanced technology once almost destroyed the world.

With the help of a mysterious, enchanting girl named Lily, Owen will have to understand his history and his genetic code to prevent global annihilation. He will also have to leave the bio-dome that keeps him safe and brave the post-apocalyptic wasteland beyond.

Teens fascinated by the dark dystopian world of Divergent and mythology of the Percy Jackson series will want to read The Lost Code.


Praise For The Lost Code (Atlanteans #1)…

“The high-stakes narrative moves forward with momentum, and a romance between Owen and Lilly is gracefully unveiled.” — Publishers Weekly

“The Lost Code will satisfy teens’ thirst for post-apocalyptic dystopian novels with just the right amount of suspense, adventure, science fiction, fantasy, and romance, but without the brutal violence found in other stories. Readers will eagerly devour Owen’s tale and look forward to its continuation.” — Voice of Youth Advocates (VOYA)

“The ending of the book leaves plenty of room for the sequel, and readers will likely be intrigued enough to continue.” — School Library Journal

“The Lost Code will stop your heart with scenes of passion and power, as it draws you in to a group of kids who are the only hope in a dying world of artifice and desperation. What happens to them is like nothing you’ve ever read.” — Peter Lerangis, NYT Bestselling author of two books in the 39 Clues series, and co-author of Somebody, Please Tell Me Who I Am

“The broad strokes of conflict and characterization make this a movie-ready action flick at heart...an accessible entree to the dystopia trend.” — Bulletin of the Center for Children’s Books

Kevin Emerson is the author of the acclaimed novel Last Day on Mars and its sequels in the Chronicle of the Dark Star. He has written thirteen middle grade novels, including The Fellowship for Alien Detection, the Oliver Nocturne Series, and Lost in Space: Return to Yesterday (based on the Netflix series), as well as eight young adult novels, including The Atlanteans trilogy and Any Second. A former science teacher, Kevin is also a drummer and singer, most recently with his band Model Shop. He lives with his family in Seattle, Washington. You can visit him online at www.kevinemerson.net.