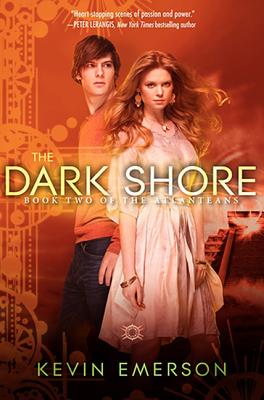 The Dark Shore, the second novel in Kevin Emerson’s Atlanteans series, continues the story of Owen Parker, one of the powerful descendants of the highly advanced Atlantean race.

Owen, Lilly and Leech have escaped Camp Eden, but the next step on their journey to find Atlantis and protect it from Paul and Project Elysium involves crossing the perilous wastelands of a wrecked planet. And unlike in EdenWest, where bloody truths were kept hidden beneath the surface, out here, the horrors live bright beneath the poisonous sun.

With treachery at every turn, Owen has no choice but to bring his wounded clan to the dark shores of Desenna, the city built from the ashes of EdenSouth, where the followers of Heliad-7 dwell. Desenna’s blood-soaked walls may hold the key to Owen’s journey in the form of the third Atlantean, as well as a deeper understanding of the true purpose of the Three, but there are also secrets lurking in the shadows, waiting to be unleashed, and once they rise, there may be no escape.

The Dark Shore combines sizzling romance, action, adventure, and powerful scenes of physical and emotional sacrifice in a way that is sure to satisfy lovers of dystopian fiction in the vein of The Maze Runner trilogy.


Praise For The Dark Shore (Atlanteans #2)…

“The twists at Desenna are expertly executed, surprising while illuminating, and...pack emotional sucker punches. Readers will beg for the follow-up to this tense, well-plotted sequel.”
— Kirkus Reviews

“[An] engrossing and engaging sequel...Solid world building enhances a plot that accelerates to a dramatic ending that will have readers craving the next installment. Plenty here to elicit rich discussions about the environment, identity, and religion, too.”
— ALA Booklist

“This fast-paced sequel to The Lost Code reads like a combination of Star Trek, Rick Riordan’s The Lightning Thief, and Suzanne Collins’s The Hunger Games.”
— School Library Journal

Praise for The Lost Code: “The high-stakes narrative moves forward with momentum, and a romance between Owen and Lilly is gracefully unveiled.”
— Publishers Weekly

Praise for The Lost Code: “The broad strokes of conflict and characterization make this a movie-ready action flick at heart...an accessible entree to the dystopia trend.”
— Bulletin of the Center for Children’s Books

Kevin Emerson is the author of many books for kids and teens, including the Chronicle of the Dark Star series, which began with the acclaimed novel Last Day on Mars, as well as The Fellowship for Alien Detection, Breakout, and Carlos Is Gonna Get It. A former science teacher, Kevin is also a drummer and singer, most recently with his bands Northern Allies and the Board of Education. He lives in Seattle, Washington. You can visit him online at www.kevinemerson.net.