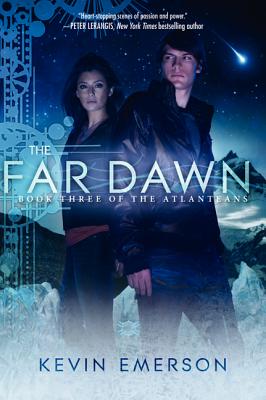 The Far Dawn is the third and final novel in Kevin Emerson's Atlanteans series, bringing the story of Atlantean descendant Owen Parker to a high-stakes, dramatic conclusion. The Atlanteans series has been praised for its "emotional sucker punches" (Kirkus Reviews), "solid world building" (ALA Booklist), and "mind-blowing fantasy with characters you'll love" (bestselling author Michael Grant).

In The Far Dawn, Owen and Lilly are on their own, two of the three Atlanteans left on a journey to find Atlantis and protect it from the selfish greed of their nemesis Paul and Project Elysium. As time grows short and darkness overtakes the planet, Owen must face Paul's greatest treachery yet. He must choose—does he save the planet, or the people he loves?

Perfect for fans of Star Wars, Percy Jackson, or The Hunger Games, The Far Dawn takes readers on an explosive journey through time and space with heartrending decisions, pulse-pounding action, and fascinating questions of science and ethics alike. Both the paperback and ebook editions include extra content on "where science stops and fantasy starts" in the world of the series.


Praise For The Far Dawn (Atlanteans #3)…

“A thematic buildup leads to a choice between saving the world and saving personal love—the execution’s surprising, believable and refreshingly true to the characters. The ending more than satisfies without being too tidy. A winning combination of high stakes, sacrifice and heroism.”
— Kirkus Reviews

“The concluding book in the Atlanteans trilogy is just as well plotted and exciting as The Lost Code (2012) and The Dark Shore (2013). A rousing and at times introspective ecothriller with just the right amount of romance.”
— ALA Booklist

“Emerson has written an exciting, thought-provoking conclusion to his mythical adventure trilogy. Fans of dystopian literature will not be disappointed.”
— Voice of Youth Advocates (VOYA)

Praise for The Dark Shore: “This fast-paced sequel to The Lost Code reads like a combination of Star Trek, Rick Riordan’s The Lightning Thief, and Suzanne Collins’s The Hunger Games.”
— School Library Journal

Priase for The Dark Shore: “The twists at Desenna are expertly executed, surprising while illuminating, and...pack emotional sucker punches. Readers will beg for the follow-up to this tense, well-plotted sequel.”
— Kirkus Reviews