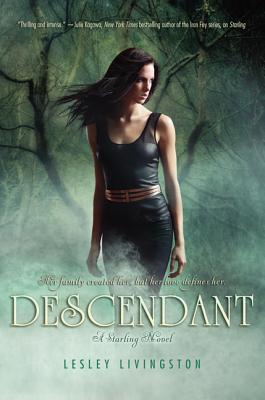 In this pulse-pounding sequel to Starling, Lesley Livingston delivers another electrifying blend of nonstop action and undeniable romance—perfect for fans of Cassandra Clare’s Mortal Instruments series.

The last thing Mason Starling remembers is the train crossing a bridge. An explosion . . . a blinding light . . . then darkness. Now she is alone, stranded in Asgard—the realm of Norse legend—and the only way for her to get home is to find the Spear of Odin, a powerful relic left behind by vanished gods.

The Fennrys Wolf knows all about Asgard. He was once trapped there. And he’ll do whatever it takes to find the girl who’s stolen his heart and bring her back—even if it means a treacherous descent into the underworld. But time is running out, and Fenn knows something Mason doesn’t: If she takes up the Spear, she’ll set in motion a terrible prophecy. And she won’t just return to her world . . . she’ll destroy it.

“There are special effects and eye candy galore, making for a quick, pulse-pounding read.”
— Publishers Weekly

Praise for Starling: “Thrilling and intense; pulls you along like the inevitable rush toward Ragnarok.”
— Julie Kagawa, New York Times bestselling author of the Iron Fey series

Lesley Livingston is an award-winning author of teen fiction best known for her Wondrous Strange trilogy. Captivated at a young age by stories of the distant past and legendary heroes and warriors, Lesley developed into a full-fledged history buff and mythology geek. Her fascination with ancient Celtic and classical civilizations—spurred on by recently discovered archaeological evidence supporting the existence of female gladiators—inspired Fallon’s story in The Valiant. Lesley holds a master’s degree in English from the University of Toronto and was a principal performer in a Shakespearean theatre company, specializing in performances for teen audiences, for more than a decade. www.lesleylivingston.com. Twitter: @LesLivingston
Loading...
or
Not Currently Available for Direct Purchase