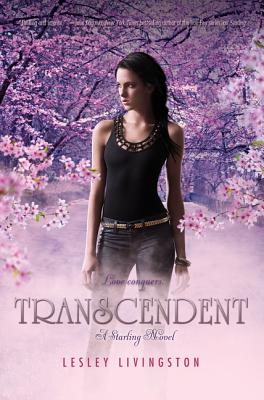 Perfect for fans of Cassandra Clare's Mortal Instruments series, this action-packed, undeniably romantic saga that began with Starling and intensified in Descendant comes to an epic conclusion in Transcendent.

On a terrace high above the streets of Manhattan, Mason Starling holds the fate of the world—and of her love, Fennrys—in her hands. For it has all come down to this. Mason Starling has completed her father's vision and become a Valkyrie—a chooser of the slain and the one who will ultimately bring about the end of the world.

“With nonstop action and mythology galore, fans of the series will cheer as Mason becomes all she was meant to be. An ideal series choice for young teens.”
— School Library Journal

Lesley Livingston is an award-winning author of teen fiction best known for her Wondrous Strange trilogy. Captivated at a young age by stories of the distant past and legendary heroes and warriors, Lesley developed into a full-fledged history buff and mythology geek. Her fascination with ancient Celtic and classical civilizations—spurred on by recently discovered archaeological evidence supporting the existence of female gladiators—inspired Fallon’s story in The Valiant. Lesley holds a master’s degree in English from the University of Toronto and was a principal performer in a Shakespearean theatre company, specializing in performances for teen audiences, for more than a decade. www.lesleylivingston.com. Twitter: @LesLivingston
Loading...
or
Not Currently Available for Direct Purchase