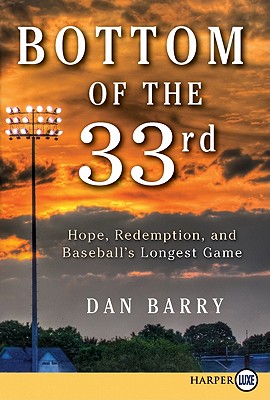 Winner of the 2012 PEN/ESPN Award for Literary Sportswriting —

Dan Barry has crafted a loving and lyrical tribute to a time and a place when you stayed until the final out...because that’s what we did in America. Bottom of the 33rd is chaw-chewing, sunflower-spitting, pine tar proof that too much baseball is never enough. — –Jane Leavy

“What a book -- an exquisite exercise in story-telling, democracy and myth-making that has, at its center, a great respect for the symphony of voices that make up America.” — –Colum McCann

“Dan’s Barry’s meticulous reporting and literary talent are both evident in Bottom of the 33rd, a pitch-perfect and seamless meditation on baseball and the human condition.” — –Gay Talese

“A fascinating, beautifully told story... In the hands of Barry, a national correspondent for the New York Times, this marathon of duty, loyalty, misery and folly becomes a riveting narrative...The book feels like ‘Our Town’ on the diamond.” — –Los Angeles Times

“An astonishing tale that lyrically articulates baseball’s inexorable grip on its players and fans, Bottom of the 33rd belongs among the best baseball books ever written.” — –Cleveland Plain Dealer

“[Dan] Barry does more than simply recount the inning-by-inning-by-inning box score. He delves beneath the surface, like an archaeologist piecing together the shards and fragments of a forgotten society, to reconstruct a time and a night that have become part of baseball lore.” — –Associated Press

“Whether you’re a baseball aficionado or a reader who just enjoys a good yarn, you’ll love this book.” — –Minneapolis Star Tribune

“A worthy companion to Roger Kahn’s classic Boys of Summer ...[Dan Barry] exploits the power of memory and nostalgia with literary grace and journalistic exactitude. He blends a vivid, moment-by-moment re-creation of the game with what happens to its participants in the next 30 years.” — –Stefan Fatsis, New York Times

“Brilliantly rendered...The book is both a fount of luxurious writing and a tour-de-force of reportage.” — –Washington Post

“[An] heroic conjuring of the past.” — –New York Times Book Review

“[A] masterpiece...destined for the Hall of Fame of baseball books.” — –Publisher's Weekly