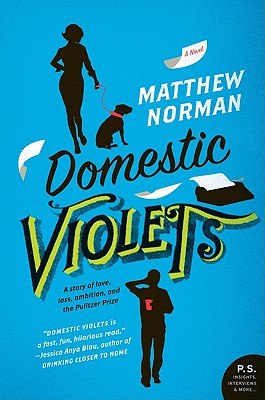 “Norman controls his complicated story and handles its chaos and plot twists with a steady, funny hand.... this is a thoroughly entertaining, light but thoughtful read.” — Publishers Weekly

“Matthew Norman has written a dastardly fun satire of contemporary domestic life [with} surprising twists on all the old conventions and a fresh perspective on a literary foundation that hearkens back to Philip Roth, John Updike and John Cheever. An astoundingly good read!” — Joshua Gaylord, author of Hummingbirds

“Timing, so important in comedy, is also exacting in Mr. Norman’s expert hands...Domestic Violets leaves the reader satisfied by the intriguing plot written in a comic spirit; it also endears the author and hero to the reader for maximum poignancy.” — New York Journal of Books

“Norman’s hilarious debut novel is a tale of a man’s middle-age quest to differentiate himself from his father and decide what’s worth changing and what’s worth keeping in his life.” — Washington Independent Review of Books on DOMESTIC VIOLETS