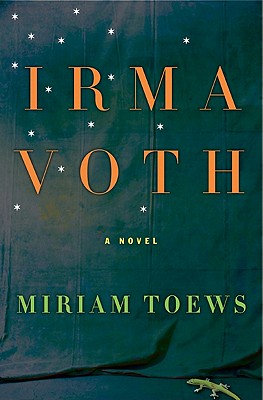 "Thenicely drawn contrast between what Irma knows and suspects and what the readerunderstands about her world gives Irma Voth asuspenseful charge from the first pages.” —Jane Smiley, Globe and Mail (Toronto)

Ina rare coming-of-age novel that blends dark truths with upliftingtransformations, acclaimed author Miriam Toewsdelivers the story of a young Mennonite woman, vulnerable yet wise beyond heryears, who carries the burden of a terrible family secret with her during aremarkable journey of survival and redemption. Irma Voth,from the award-winning author of Swing Low and A Complicated Kindness,is a poignant and elegant exploration of one woman’s difficult odyssey todiscover her own potential—a path that leads her away from her close-knitcommunity and into the wide and unknown world beyond.


Praise For Irma Voth: A Novel…

“A strong and skillful novel . . . a parable of redemption, a powerful theme . . . that leaves the reader with a comforting glow of hope.”
— Annie Proulx, Financial Times

“In this compelling and beautiful novel, Toews’s quirky and authentic voice shows increasing range and maturity. She is well on her way to fulfilling her promise as an important and serious writer.”
— Montreal Gazette

“Simultaneously poignant and humorous . . . perfectly captures this young woman’s attempt to find her niche in a world so different from that in which she was raised . . . Toews’s unique voice shines.”
— Booklist

“A literary novel marked by charm, wit and an original approach to language.”
— Kirkus Reviews

“A witty and thoughtful coming-of-age story. . . . A novel about parenthood and sisterhood, and about redefining those relationships as people grow . . . it succeeds tremendously.”
— The Washington Independent Review of Books

Miriam Toews was born in the small Mennonite town of Steinbach, Manitoba. She has published five novels and a memoir of her father, and is the recipient of numerous literary awards in Canada, including the Governor General’s Literary Award (for A Complicated Kindness) and the Rogers Writers’ Trust Fiction Prize (for The Flying Troutmans). In 2010 she received the prestigious Writers’ Trust Engel/Findley Award for her body of work. Irma Voth is Toews’s most recent novel. She lives in Toronto.