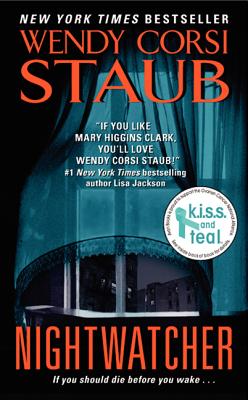 One of the most exciting of the new breed of thriller and suspense writers, Wendy Corsi Staub asks, “Are you ever truly safe...even in your own home?” With Nightwatcher, the acclaimed, New York Times and USA Today bestselling author of Hell to Pay delivers a ripped-from-the-headlines masterwork of suspense, the first book in an electrifying new series. Intense, powerful, and refreshingly original, Nightwatcher returns to the site of America’s worst national nightmare—New York City on September 11, 2001—as a serial killer, plying his bloody trade in  the chaos following the 9/11 terrorist attacks, operates unnoticed by everyone…except for one frightened woman who has seen his face. Author Lee Child has called her work, “solid gold suspense,” and any reader who’s ever stayed up late, devouring the novels of Lisa Jackson and Lisa Gardner with every light on in the house, should prepare to lose even more sleep over Wendy Corsi Staub’s Nightwatcher.

“Staub is boss when it comes to relaying fictionalized accounts of revulsion…Suspenseful, powerful, tense and-as usual-wonderfully written with an ending that will leave you guessing...A great read!” — Suspense Magazine

“The thrills are near constant & combined with the waking nightmare state of 9/11, result in a high-tension and deeply visceral tale that will leave readers in a crippling state of uncertainty. The fear, the paranoia, the desperation--it leaps right off the page and gets under your skin.” — Criminal Element

“Wendy Corsi Staub has a frightening little tale that will make the reader think about sleeping with the lights on with the dog nearby, ‘Nightwatcher.’” — Iron Mountain Daily

“This first book in a new trilogy starts off with a bang. The action builds right through to the explosive ending. Allison is a relatable character, and Staub really nails the atmosphere of New York immediately following 9/11. Four Stars!” — RT BookReviews