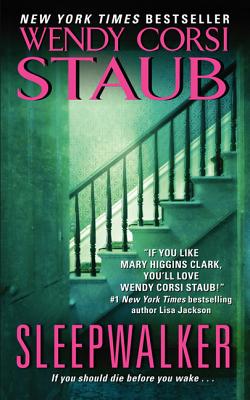 Following on the heels of her gripping and sensational thriller, Nightwatcher, New York Times bestselling author Wendy Corsi Staub takes suspense to a whole new level with Sleepwalker. The second book in the remarkable series that began in the chaos and horror of the 9/11 terrorist attacks in New York City, Staub’s Sleepwalker picks up the story ten years later—when Allison MacKenna, who barely escaped death on that terrible day at the hands of a serial killer, realizes that the nightmare is not over…and it may be closer to home than she ever imagined. This is top-tier suspense fiction that fans of Lisa Gardner and Lisa Jackson won’t be able to put down.

“The second books of Staub’s newest trilogy is a suspense-filled ride that keeps the shocks coming…As always, Staub leaves us wanting more and happy that there is another book to come in this trilogy. 4 stars!” — RT Book Reviews

“Staub is boss when it comes to relaying fictionalized accounts of revulsion…Suspenseful, powerful, tense and-as usual-wonderfully written with an ending that will leave you guessing...A great read!” — Suspense Magazine

“The thrills are near constant & combined with the waking nightmare state of 9/11, result in a high-tension and deeply visceral tale that will leave readers in a crippling state of uncertainty. The fear, the paranoia, the desperation--it leaps right off the page and gets under your skin.” — Criminal Element

“This first book in a new trilogy starts off with a bang. The action builds right through to the explosive ending. Allison is a relatable character, and Staub really nails the atmosphere of New York immediately following 9/11. Four Stars!” — RT BookReviews