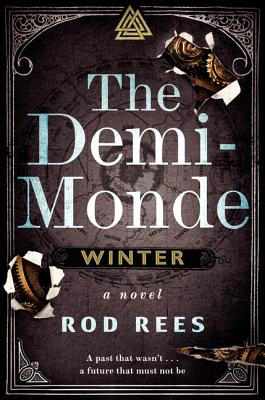 “Like a literary love child of Neal Stephenson and Tad Williams, The Demi-Monde: Winter, the first in a proposed quartet, is a dark, dangerous adventure tale set in a vaguely steampunk virtual world populated by the avatars of some of history's most villainous characters. Eighteen-year-old Ella is thrust into a world unlike any she has ever known when she is hired to retrieve the president's daughter from a virtual environment that was originally created to train combat soldiers in guerrilla warfare. A page-turner and a highly entertaining opening to a very promising series.”
— Billie Bloebaum, Powell's Books At PDX, Portland, OR
View the List

“You can’t help getting caught up in the smartly-paced story…which is served up with lashings of steampunk relish.”
—SFX (UK)

“Rees makes the book work: the world he’s created is a psychopathic nightmare.”
—The Guardian

In the Demi-Monde, author Rod Rees has conjured up a terrifying virtual reality, a world dominated by history’s most ruthless and bloodthirsty psychopaths—from Holocaust architect Reinhard Heydrich to Torquemada, the Spanish Inquisition’s pitiless torturer, to Josef Stalin’s bloodthirsty right-hand man/monster, the infamous Beria. The Demi-Monde: Winter kicks off a brilliant, high concept series that blends science fiction and thriller, steampunk and dystopian vision. If Neil Gaiman, Neal Stephenson, James Rollins, and Clive Cussler participated in Suzanne Collins’s The Hunger Games, the result might be something akin to the dark and ingenious madness of Rees’s The Demi-Monde: Winter.


Praise For The Demi-Monde: Winter: A Novel…

“Explosively creative barely defines Rod Rees’s The Demi-Monde Winter. It blew me away as the novel skated on the razor’s edge between where we are today and where we’re headed tomorrow. As much a cautionary tale as a gripping thriller cut from a digital cloth.”
— James Rollins, New York Times bestselling author of The Devil Colony

“Strong characters, along with the clever interweaving of seemingly disparate plot threads, make this a standout selection for fans of high-tech sf and cyberfiction.”
— Library Journal.com (starred review)

“A brilliant, high concept series that blends science fiction and thriller, steampunk and dystopian vision. If Neil Gaiman, Neal Stephenson, James Rollins, and Clive Cussler participated in Suzanne Collins’s THE HUNGER GAMES, the result might be something akin to the dark and ingenious madness of Rees’s THE DEMI MONDE: WINTER.”
— BookReporter (starred review)

“Superb….Such an inventive world is engrossing on its own, but the wildly unpredictable plot and characters make for plenty of surprises and twists.”
— Wichita Eagle

Rod Rees has built pharmaceutical factories in Dhaka, set up a satellite communication network in Moscow, and conceived and designed a jazz-themed hotel in the U.K. Now a full-time writer, he lives in Daventry, England, with his wife, Nelli, and their two children.