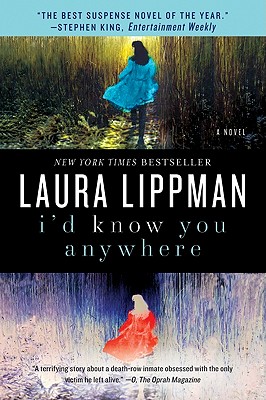 I'd Know You Anywhere (Paperback)

“During the summer of 1985, Walter Bowman is a young 'spree' killer when he kidnaps 15-year-old Elizabeth Lerner. This psychological thriller spans the following 20 years in the life of Elizabeth Lerner/Eliza Benedict. Having left behind the memory of her captivity and rescue, and of Walter's capture, trial, and death-sentence verdict, she is drawn back to the past when she is contacted by Walter's advocate asking her help in commuting his upcoming execution to a life sentence. This compelling and sensitive story of predator and prey is a work of suspense not to be missed.”
— Carol Hicks, Bookshelf At Hooligan Rocks, Truckee, CA
View the List

“Laura Lippman is among the select group of novelists who have invigorated the crime fiction arena with smart, innovative, and exciting work.”
—George Pelecanos

“Lippman’s taut, mesmerizing, and exceptionally smart drama of predator and prey is at once unusually sensitive and utterly compelling.
—Booklist

Laura Lippman, New York Times bestselling author of What the Dead Know, Life Sentences, and the acclaimed Tess Monaghan p.i. series, delivers a stunning stand-alone novel that explores the lasting effects on lives touched by crime. With I’d Know You Anywhere, Lippman—master of mystery and psychological suspense, winner of every major literary prize given for crime fiction, including the Edgar®, Agatha, and Nero Wolfe Awards—tells a gripping and richly textured tale of a young woman whose life dangerously entwines once again with a man on Death Row who had kidnapped her when she was a teenager. This is superior mystery writing in the vein of Kate Atkinson.


Praise For I'd Know You Anywhere: A Novel…

“Ex-journalist Lippman never forgets as she moves from past to present and from perspective to perspective that nothing is more important—or more elusive—than the truth.”
— Kirkus Reviews

“Lippman’s dedicated fans will find themselves well rewarded with I’D KNOW YOU ANYWHERE, an exceptional novel in every way, which is sure to gain her many new followers.”
— San Diego Union-Tribune

“With the summer reading season coming to a close, don’t let I’D KNOW YOU ANYWHERE be the one that got away.”
— St. Louis Post-Dispatch

“I’d Know You Anywhere” ranks with her very best.”
— Lisa Ko, author of The Leavers

The popular mystery-series author’s latest stand-alone: a terrifying story about a death-row inmate obsessed with the only victim he left alive.
— O magazine

This is a story that grips you not with suspense but with its acute psychological autopsy of a survivor. Lippman’s knack for elucidating the horrors humans can inflict on one another through violence and manipulation — while telling a compelling story —is disarming and fascinating.-
— USA Today

I’d Know You Anywhere is a crime story, but it’s not a whodunit. Rather, it’s an exquisitely sensitive story about the psychological impact of crime on its victims. It’s a story about shame, about anger, about survivor’s guilt.
— Fort Worth Star-Telegram

Laura Lippman is one of those uncommonly talented authors whose work continues to get better in every book she writes. I’d Know You Anywhere is a riveting psychological suspense novel.
— Globe and Mail (Toronto)