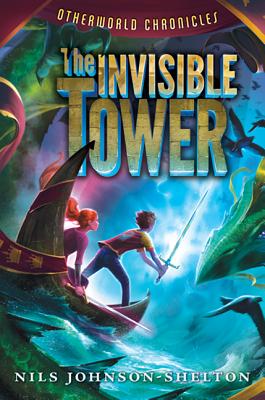 You are special, Arthur, says a mysterious message in the game. In one week's time you will come to me at the IT.

Cryptic clues lead Artie to a strange place called the Invisible Tower, where he discovers he is actually King Arthur, brought to life in the twenty-first century. Artie has already conquered the virtual Otherworld—now it's up to him to save the real Otherworld as well.

Magical dragons, hungry wolves, and powerful sorcerers await as Artie and his sister, Kay, embark on a quest worthy of the Knights of the Round Table.

“An entertaining quest fantasy, sprinkled with hints of hidden agendas, and juiced with enough creativity to carry readers happily into future episodes.”
— Booklist

“The draw here is the action, and there is plenty of that. As Artie dodges fire spells and enchanted swords, gamers will find themselves reaching for their controllers while they await the series’ next installment.”
— Bulletin of the Center for Children’s Books

“Fresh and fun, with plenty to offer the avid reader looking for a new series.”
— Voice of Youth Advocates (VOYA)