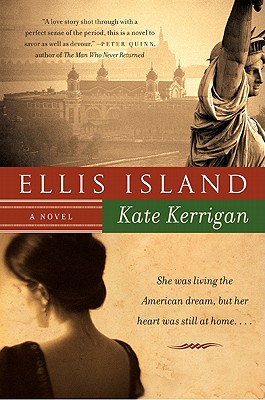 “A standout novel….A rare combination of historical enlightenment and sheer enjoyment.”
—Peter Quinn, author of The Man Who Never Returned

Already a hit in the United Kingdom, Ellis Island by Kate Kerrigan is both a poignant love story and a lyrical, evocative depiction of the immigrant experience in early 20th century America. Set in the 1920s, Kerrigan’s novel tells of a young Irish woman who must choose between her new life in New York City and her husband back home in Ireland, brilliantly capturing these two vastly different worlds in the process. Readers of historical fiction, as well as fans of the novels of Frank Delany and other Irish themed works, will adore their time spent on Ellis Island.


Praise For Ellis Island: A Novel…

“Kate Kerrigan’s Ellis Island is a standout novel that vividly brings alive the very different worlds of New York and Ireland in the 1920s. A love story shot through with a perfect sense of the period, it is a rare combination of historical enlightenment and sheer enjoyment.” — Peter Quinn, author of The Man Who Never Returned

“Kerrigan is a lovely writer and her book breaks from the traditional mould.” — Sunday Tribune (Ireland)

“This story is written with so much heart, its beat is palpable in every word on every page.” — Cecelia Ahern on Recipes for a Perfect Marriage

Ellie and John find a connection from the moment they meet and become childhood sweethearts. Do you think it is possible to sustain that relationship into adulthood? Are they truly soul mates?

What is Ellie’s relationship like with her parents? Is it understandable why she prefers spending time with John’s parents, Maidy and Paud? What do they provide that Ellie’s own parents can’t?

How is early married life difficult for Ellie and John? When Ellie decides to go to America, John says that she’s running away. Do you think there is some truth to this statement? Why or why not?

Isobel Adams treats Ellie not only as a maid, but sometimes as a confidant. Do you think this kind of behavior is appropriate? Is Isobel a good mistress and employer?

Seeing how happy her friend Sheila is with her fiancé, Ellie makes the observation that anything is possible in America. How is this true compared to what life was like in Ireland? Do you think this is true today?

Why does Ellie find Charles Irvington attractive? What can he offer her? If you were Ellie, who would you have chosen to be with, Charles or John, and why?

Why doesn’t John want to move to America? Are you sympathetic with his views, or do you think he should have seriously considered Ellie’s plan for him to join her in New York?

Do you think Ellie made the right decision in going back to Ireland? Why or why not? What would her life have been like if she had stayed in America?

What difficulties does Ellie encounter when she returns home? How does she use what she’s learned in America to improve her situation there?