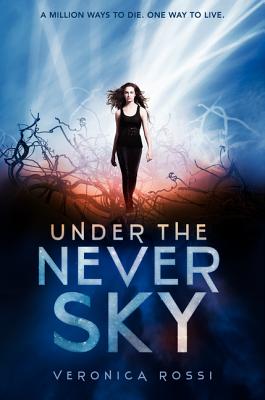 “Aria was born into a world of Dwellers and leads a life that is comfortable and free of fear. Perry lives in a wasteland called the Death Shop and needs to constantly fight for survival. When they first meet, they instantly hate each other, but as they travel together they realize how each of their lives depends on the strengths of the other. Their journey will determine the fate of both worlds. A stunning debut novel for teens of both genders who love adventure, action, romance, and unforgettable characters. Highly recommended!”
— Karen Briggs, Great Northern Books and Hobbies, Oscoda, MI
View the List

Exiled from her home, the enclosed city of Reverie, Aria knows her chances of surviving in the outer wasteland—known as The Death Shop—are slim. Then Aria meets an Outsider named Perry. He's wild—a savage—and her only hope of staying alive. A hunter for his tribe in a merciless landscape, Perry views Aria as sheltered and fragile—everything he would expect from a Dweller. But he needs Aria's help too; she alone holds the key to his redemption.

In alternating chapters told in Aria's and Perry's voices, Under the Never Sky subtly and powerfully captures the evolving relationship between these characters and sweeps readers away to a harsh but often beautiful world. Continuing with Through the Ever Night and concluding with Into the Still Blue, the Under the Never Sky trilogy has already been embraced by readers in twenty-six countries and been optioned for film by Warner Bros.

“The interwoven narratives of both male and female protagonists offer broad appeal. Already selling in more than twenty countries and with film rights optioned by Warner Bros. Entertainment, Rossi’s first novel has the potential to be a blockbuster.”
— Voice of Youth Advocates (VOYA)

“Rossi nails the feat of offering dual perspectives. Rossi grounds her worldbuilding in language, creating idioms for the Dwellers and Outsiders that add texture to their respective myths; her characters are brave and complex and her prose smooth and evocative. Inspired, offbeat and mesmerizing.”
— Kirkus Reviews (starred review)

“An incredibly original plot. You won’t be able to put this book down…we can’t wait for the next installment in the trilogy!”
— Seventeen.com

“Fans of The Hunger Games will cheer Aria’s gradual, warrior-like transformation over the course of the novel. Perry is an enigmatic figure whose past emerges slowly and whose strength of character is only amplified by his flaws.”
— Booklist

“Aria is a memorable protagonist as she battles her own shortcomings with the same ferocity as she fights for the lives of those she loves. The world itself-sharply divided into garishly surreal Realms, cozy Pods, and harsh, unforgiving outside-is as creatively and lavishly developed as the characters themselves.”
— The Horn Book

“Rossi’s novel transcends. There’s a luminescence to her world that denies the grim realities of environmental degradation, domed cities, genetic disease, and roaming bands of cannibals. It comes across as the work of a master craftsman.”
— School Library Journal (starred review)

“Refreshing. Exhilarating. Rossi unravels the world’s secrets, perils, and wonders with a sure hand.”
— Bulletin of the Center for Children’s Books

“Will capture your imagination and your heart.”
— Justine

Veronica Rossi graduated from UCLA. The first book in her New York Times bestselling Under the Never Sky trilogy was named an ALA Best Fiction for Young Adults selection and an Indie Next List Pick. The second book, Through the Ever Night, was a New York Times and USA Today bestseller. The series has been optioned for film. Veronica lives in northern California with her husband and two sons.