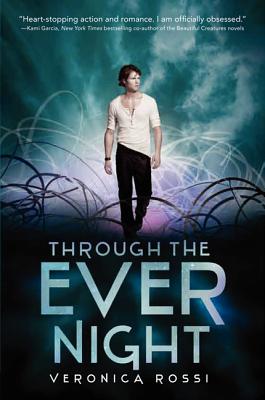 Through the Ever Night (Under the Never Sky Trilogy #2)

A world-defying love is put to the ultimate test in the New York Times and USA Today bestselling sequel to Veronica Rossi's "masterpiece," Under the Never Sky (Examiner.com ). In this second book in her spellbinding Under the Never Sky trilogy, bestselling author Veronica Rossi combines fantasy and dystopian elements to create a love story as perilous as it is unforgettable.

It's been months since Aria last saw Perry. Months since Perry was named Blood Lord of the Tides, and Aria was charged with an impossible mission. Now, finally, they are about to be reunited. But their reunion is far from perfect. The Tides don't take kindly to Aria, a former Dweller. And with the worsening Aether storms threatening the tribe's precarious existence, Aria begins to fear that leaving Perry behind might be the only way to save them both.

Threatened by false friends and powerful temptations, Aria and Perry wonder, Can their love survive through the ever night?

“Perry and Aria are convincing protagonists as they both cling to and exploit each other to get through their days. In a dying world, even the bad guys have the complexity of desperation; they act as effective foils against which Aria and Perry develop as flawed, though well-intentioned, leaders.”
— Horn Book Magazine

“Favorite characters return, new characters emerge, and fans of Under the Never Sky are in for a treat.”
— Romantic Times, 4 Stars

“This story of loyalty, survival, and love satisfies with its balance of action and emotional resonance.”
— Booklist

“Rossi does not miss a beat as she raises the stakes in this well-written and fast-paced sequel to Under the Never Sky.”
— Voice of Youth Advocates (VOYA)

Veronica Rossi graduated from UCLA. The first book in her New York Times bestselling Under the Never Sky trilogy was named an ALA Best Fiction for Young Adults selection and an Indie Next List Pick. The second book, Through the Ever Night, was a New York Times and USA Today bestseller. The series has been optioned for film. Veronica lives in northern California with her husband and two sons.