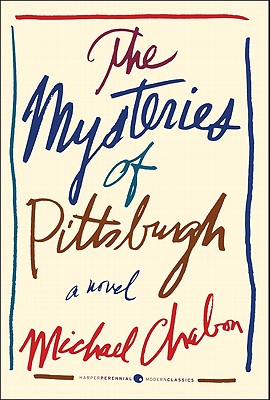 "Chabon’s writing is deft and delicate — almost every page includes a delightful phrase or two. He mingles dialogue, the Pittsburgh cityscape, descriptions of the characters’ activity and Art’s thoughts and feelings to achieve that magical illusion good novels give — that the reader is living the character’s life with all its savors, jokes and pangs." — Boston Herald

The New York Times bestseller that put Michael Chabon in the pantheon of great American novelists, beautifully repackaged as a deluxe edition with French flaps and deckle edge paper.

The enthralling debut from bestselling novelist Michael Chabon is a penetrating narrative of complex friendships, father-son conflicts, and the awakening of a young man’s sexual identity. Chabon masterfully renders the funny, tender, and captivating first-person narrative of Art Bechstein, whose confusion and heartache echo the tones of literary forebears like The Catcher in the Rye’s Holden Caulfield and The Great Gatsby’s Nick Carraway. The Mysteries of Pittsburgh incontrovertibly established Chabon as a powerful force in contemporary fiction, even before his Pulitzer Prize-winning novel The Amazing Adventures of Kavalier & Clay set the literary world spinning. An unforgettable story of coming of age in America, it is also an essential milestone in the movement of American fiction, from a novelist who has become one of the most important and enduring voices of this generation.


Praise For The Mysteries of Pittsburgh (Harper Perennial Deluxe Editions)…

“Absolutely terrific.... Anybody can write a realistic account of his first postgraduation summer of growing up and making love, but to make such a story the stuff of legend, as Chabon has done here (and Fitzgerald did before him), takes something close to genius.” — Playboy

Simply, the best first novel I’ve read in years. ... It will find its place beside On the Road and Catcher in the Rye. — Carolyn Forche

A thoroughly wonderful novel. ... [It] did two things no book had done for me in a long time: it made me feel good and it took me completely by surprise. — David Leavitt

“Astonishing…. The voice of a young writer with tremendous skill as he discovers, joyously, just what his words can do.” — Alice McDermott, New York Times

“Chabon writes with unusual sensitivity. His beautifully realized characters are revealed through the perfect pitch of his dialogue.” — Denver Post

Chabon’s writing is deft and delicate -- almost every page includes a delightful phrase or two. He mingles dialogue, the Pittsburgh cityscape, descriptions of the characters’ acticity and Art’s thoughts and feelings to achieve that magical illusion good novels give -- that the reader is living the character’s life with all its savors, jokes and pangs. — Boston Herald

“Remarkable. ... What makes this book—and Chabon—worth our attentiation is Chabon has chosen not merely to record all the ills of an oversexed, overindulged generation with nowhere to go but to bed or to a bar; he has chosen to explore, to enter this world and try to find what makes it work, why love and friendship choose to visit some, deny others. — Los Angeles Times

The quiet lushness of both the concept and the language are typical of Chabon’s fresh, convincing style. What makes the novel extraordinary, however, is the exactness and care with which he manipulates such images and patterns of imagery.... Making a reader experience again a sense of endless possibility is one of the most satisfying and quintessentially American things an American Bildungsroman can do. Chabon’s The Mysteries of Pittsburgh adds to the canon one of the rare novels actually able to do it. — Village Voice

“There’s a lot of talk about this novel. It’s almost as if there’s going to be a great big literary bash. The guys who will be on the guest list are a cinch. Tom Sawyer and Huck Finn and Holden Caulfield.... And now, from The Mysteries of Pittsburgh, Art Bechstein.” — Washington Post Book World

“[A] very funny and very eloquent book—a book that both earns and wears easily such adjectives as ‘brilliant’.... The Mysteries of Pittsburgh is a funny, charming, hugely entertaining and excellently written book.” — Pittsburgh Press