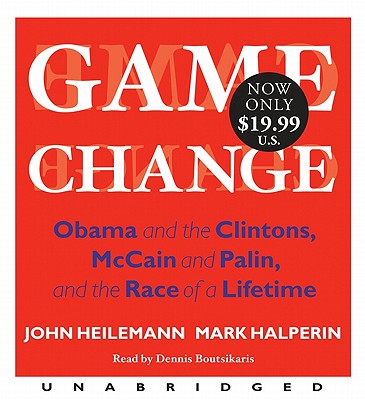 In 2008, the presidential election became blockbuster entertainment. Everyone was watching as the race for the White House unfolded like something from the realm of fiction. The meteoric rise and historic triumph of Barack Obama. The shocking fall of the House of Clinton—and the improbable resurrection of Hillary as Obama's partner and America's face to the world. The mercurial performance of John McCain and the mesmerizing emergence of Sarah Palin.

Based on hundreds of interviews with the people who lived the story, Game Change is a reportorial tour de force that reads like a fast-paced novel. Character driven and dialogue rich, replete with extravagantly detailed scenes, this is the occasionally shocking, often hilarious, ultimately definitive account of the campaign of a lifetime.

Dennis Boutsikaris received an Obie Award for his performance in Sight Unseen and was Mozart in Amadeus on Broadway. His films include *batteries not included, The Dream Team, and Boys On The Side. His TV work includes And Then There Was One, The Last Don and Chasing The Dragon; he was most recently the D.A. of NY in Sidney Lumet's 100 Centre Street.