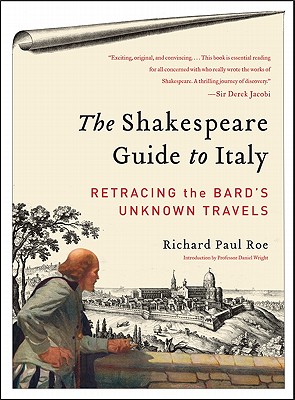 The Shakespeare Guide to Italy (Paperback)

“Exciting, original, and convincing. . . . This book is essential reading for all concerned with who really wrote the works of Shakespeare. A thrilling journey of discovery." —Sir Derek Jacobi, Shakespearean actor, Associate Artist, Royal Shakespeare Company

Equal parts literary detective story and vivid travelogue, The Shakespeare Guide to Italy chronicles author Richard Paul Roe’s thirty-year quest to find the locations in which Shakespeare set his ten Italian plays—delivering a text which will forever change our understanding of how to read the Bard of Avon and irrevocably alter our vision of who William Shakespeare really was.

More than 150 full-color images illustrate and enhance Roe’s captivating narrative, illuminating his lifelong journey and shining alight into the depths of Shakespeare’s experiences in Italy. Until now,Shakespeare’s use of Italian backdrops—Romeo and Juliet’s Verona, Othello’s Venice, Much Ado About Nothing’s Messina, to name a few—has been the source of controversy and conjecture. With The Shakespeare Guide to Italy,Roe’s meticulous study reveals the secrets that have eluded scholars for centuries.


Praise For The Shakespeare Guide to Italy: Retracing the Bard's Unknown Travels…

“A fascinating look at a largely untouched aspect of Shakespeare’s identity and influences. Recommended for Shakespeare enthusiasts and scholars as well as travelers looking for a new perspective, this is also particularly intriguing as a companion to specific plays.”
— Library Journal (starred review)

“Exciting, original, and convincing. . . . This book is essential reading for all concerned with who really wrote the works of Shakespeare. A thrilling journey of discovery.”
— Sir Derek Jacobi, Shakespearean actor, Associate Artist, Royal Shakespeare Company

“This is a revolutionary and revelatory book, part thrilling detective story and part sober scholarly treatise.”
— Michael York, Shakespearean actor of stage and screen and co-author of A Shakespearean Actor Prepares

“This represents a hugely significant intervention in the study of Shakespeare and his dramatic works.”
— Dr. William Leahy, Head of the School of Arts, Shakespeare Authorship Studies, Brunel University
or
Not Currently Available for Direct Purchase
Copyright © 2020 American Booksellers Association