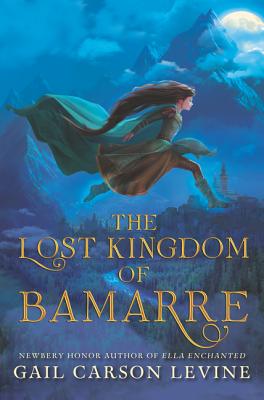 The Lost Kingdom of Bamarre


Praise For The Lost Kingdom of Bamarre…

“In her usual witty, magical style, Gail Carson Levine has built a tale of resilience and rebellion that feels more timely than ever... Readers both familiar and new to Levine’s storytelling will devour this tale and cheer its stunning conclusion.” — Soman Chainani, New York Times bestselling author of the School for Good and Evil series

★ “Levine riffs gently on “Rapunzel” and delivers an arch appraisal of discrimination and bigotry, cloaked in a magical, medieval, vaguely European fairy-tale setting. A captivating and charming adventure sure to please young readers and longtime fans.” — Kirkus Reviews (starred review)

“Perry’s struggle to reconcile her father’s love for her with his deep hatred of the Bamarre resonates, as does her burgeoning and nuanced definition of strength. Her growing awareness of prejudice and ethnocentrism is insightful and believable; readers will easily connect her journey to their own experiences.” — Publishers Weekly

“Levine slips seamlessly back into the world of The Two Princesses of Bamarre (2001)... This balances elements of Rapunzel and a smart, timely exploration of the prejudices that exist between people, and fans of Levine will rejoice to watch the journey of another strong, flawed heroine.” — Booklist

“With its relevant commentary on race and prejudice and its strong female lead, this newest addition to Levine’s oeuvre will appeal to the author’s followers and fantasy fans.” — School Library Journal

“A clear set up of rights and wrongs, a sympathetic protagonist, and a sweeping magical setting—there’s a lot that existing Levine fans will recognize and appreciate here, and new readers will be pleased to learn that the author has plenty more for them to enjoy.” — Bulletin of the Center for Children’s Books