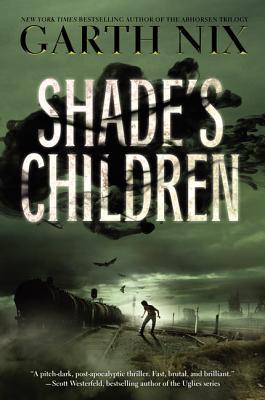 From renowned fantasy author of the Old Kingdom series, Garth Nix, comes a dystopian fantasy perfect for fans of Hunger Games and Divergent.

Imagine a world where your fourteenth birthday is your last and where even your protector may not be trusted….

In a futuristic urban wasteland, evil Overlords have decreed that no human shall live a day past their fourteenth birthday. On that Sad Birthday, the children of the Dorms are taken to the Meat Factory, where they will be made into creatures whose sole purpose is to kill.

The mysterious Shade—once a man, but now more like the machines he fights—recruits the few teenagers who escape into a secret resistance force. With luck, cunning, and skill, four of Shade's children come closer than any to discovering the source of the Overlords' power—and the key to their downfall. But the closer they get, the more ruthless Shade seems to become.

“The alternate world he [Nix] creates is amply imagined and the twists and turns of the action-filled plot compelling.”
— Publishers Weekly

“This pitch-dark, post-apocalyptic thriller will keep you reading and wild-eyed. Fast, brutal and brilliant.”
— Scott Westerfeld, author of Uglies