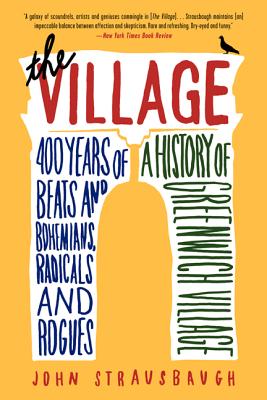 400 Years of Beats and Bohemians, Radicals and Rogues, a History of Greenwich Village

From the Dutch settlers and Washington Square patricians, to the Triangle Shirtwaist fire and Prohibition-era speakeasies; from Abstract Expressionism and beatniks, to Stonewall and AIDS, the connecting narratives of The Village tell the story of America itself.

Praise For The Village: 400 Years of Beats and Bohemians, Radicals and Rogues, a History of Greenwich Village…

“[A] loving and thoroughly researched look at what [Strausbaugh] calls ‘a zone of rogues and outcasts from the start.’ . . . Fine social history humanized with a sort of paradise-lost wistfulness.”
— Kirkus Reviews (starred review)

“Strausbaugh has produced the definitive history of America’s bohemian wellspring and prototypical modern neighborhood with all the verve and fun and rigor it deserves.”
— Kurt Andersen, bestselling author of True Believers and Heyday

“A great, sprawling saga of genius and vice in New York City’s Greenwich Village. John Strausbaugh captures Bohemia at its best and level worst, reminding us why we love this place. His account is breathtaking.”
— Teresa Carpenter, bestselling author of New York Diaries

“The very best kind of cultural history: Literate, lucid, erudite, and entertaining.”
— Michael Lesy, author of Murder City: The Bloody History of Chicago in the Twenties

John Strausbaugh covered downtown Manhattan history and culture as a writer and editor for the weekly New York Press from 1988 through 2002. For the New York Times he wrote and hosted the "Weekend Explorer" series of articles, videos, and podcasts on New York City history. He has also written for the Washington Post, NPR, and PBS. His previous books include E: Reflections on the Birth of the Elvis Faith, Rock 'Til You Drop, and Black Like You. A former resident of Greenwich Village, the Lower East Side, and Hell's Kitchen, he now lives in Brooklyn Heights.