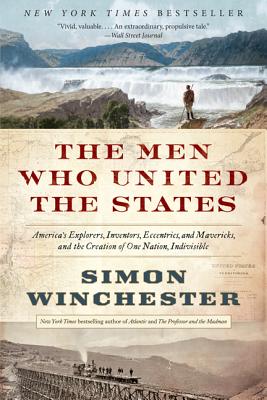 The Men Who United the States

America's Explorers, Inventors, Eccentrics, and Mavericks, and the Creation of One Nation, Indivisible

Simon Winchester, the acclaimed New York Times bestselling author of Atlantic and The Professor and the Madman, delivers his first book about America: a fascinating popular history that illuminates the men who toiled fearlessly to discover, connect, and bond the citizenry and geography of the U.S.A. from its beginnings.

How did America become “one nation, indivisible”? What unified a growing number of disparate states into the modern country we recognize today? To answer these questions, Winchester follows in the footsteps of America’s most essential explorers, thinkers, and innovators, such as Lewis and Clark and the leaders of the Great Surveys; the builders of the first transcontinental telegraph and the powerful civil engineer behind the Interstate Highway System. He treks vast swaths of territory, from Pittsburgh to Portland, Rochester to San Francisco, Seattle to Anchorage, introducing the fascinating people who played a pivotal role in creating today’s United States.

Throughout, he ponders whether the historic work of uniting the States has succeeded, and to what degree. Featuring 32 illustrations throughout the text, The Men Who United the States is a fresh look at the way in which the most powerful nation on earth came together.


Praise For The Men Who United the States: America's Explorers, Inventors, Eccentrics, and Mavericks, and the Creation of One Nation, Indivisible…

“A rousing tribute to the alliances, agencies, and inventions - from Lewis and Clark to the Internet - that underpin our more perfect union. A stunning, highly original feast of a book.” — STACY SCHIFF, author of the Pulitzer Prize-winning Cleopatra

“[M]esmerizing and fascinating… Mr. Winchester is a master storyteller, and all the individuals, places, and events that he passionately writes about come to life in exquisite detail.” — New York Journal of Books

“Winchester has found a thematic way to tell this familiar story so it seems fresh and informative, even fascinating.” — St. Louis Post-Dispatch

“Winchester provides surprising insights into our social history, further enriching his narrative with accounts of his personal odysseys around the country. The results are highly recommended for public and school libraries and all readers looking for new and stimulating perspectives on the history of America.” — Library Journal

“[I]nformative and absorbing” — The Oregonian (Portland)

“Simon Winchester never disappoints, and The Men Who United the States is a lively and surprising account of how this sprawling piece of geography became a nation. This is America from the ground up. Inspiring and engaging.” — Tom Brokaw

“What makes this book so enjoyable is that he ties the development of these advances to some brilliant but idiosyncratic personalities.” — BookPage

“He … freshens U.S. history by refusing to tell it through the usual suspects.” — Seattle Times

“The subtitle promises readers a sackful of exciting tales-and the author delivers. This is a clever, engaging and original look at what would seem well-trodden historical paths; but Winchester, delightfully, breaks a fresh trail.” — The Economist

“The tales he weaves were more engaging than most contemporary fiction.” — Zócalo Public Square