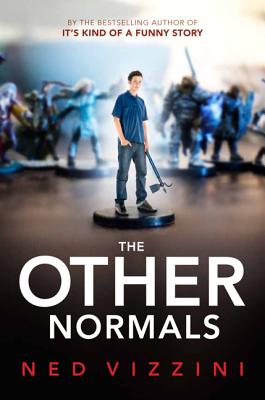 From Ned Vizzini, the best-selling author of It's Kind of a Funny Story and the co-author of the New York Times bestseller House of Secrets, comes this geektastic tale about role-playing and growing up. The Other Normals is a story from one of the most brilliant voices in teen literature about the winding and often hilarious path to manhood.

Given the chance, fifteen-year-old Peregrine "Perry" Eckert would dedicate every waking moment to Creatures & Caverns, a role-playing game with magical creatures, spell casting, and deadly weapons. The world of C&C is where he feels most comfortable in his own skin. But that isn't happening—not if his parents have anything to do with it. Concerned their son lacks social skills, they ship him off to summer camp.

Perry is bracing himself for the worst summer of his life. Everything changes, however, when Perry gets to camp and stumbles into the World of the Other Normals. There he meets Mortin Enaw, one of the creators of C&C, and mythical creatures from the game. Perry's new otherworldly friends need his help to save their princess and prevent mass violence. As they embark on their quest together, Perry realizes that his nerdy childhood has uniquely prepared him to be a great warrior in this world, and maybe even a hero. But to save the princess, Perry will have to learn how to make real connections in the human world as well.


Praise For The Other Normals…

“With a deft sense of humor and a keen ear for funny and realistic teen dialogue, Vizzini explores one teen everyman’s quest to become a hero, one roll of the six-sided die at a time …. Great geeky fun.”
— Kirkus Reviews

“[A] lighthearted yet bitingly funny fantasy … Through the protagonist’s incisive observations, rampant insecurities, and unapologetic embrace of nerd-culture, Vizzini depicts the teen male experience with authenticity and honesty.”
— The Horn Book

“Perry is lovably awkward, and his goofy eagerness is offset by his bitingly funny observations…. Vizzini’s true strength is in authentically depicting the skills needed to survive growing up.”
— ALA Booklist

“THE OTHER NORMALS is wildly imaginative, incredibly funny, and weirdly wise. I don’t know where Vizzini gets this stuff —it’s like he’s tapped into the collective unconscious of alienated adolescents everywhere.”
— Lev Grossman, New York Times bestselling author of THE MAGICIAN and THE MAGICIAN KING

“Vizzini has created a likable geek in Perry and an interesting alternate world that could easily be the setting for more adventures. This book will be enjoyed by readers open to something that straddles the line between fantasy and science fiction.”
— School Library Journal

“A fast-paced coming-of-age story with a fascinating premise which, to the great credit of the author, is seamless and strangely believable.”
— R.A. Salvatore, New York Times Bestselling author of CHARON'S CLAW and The Dark Elf Trilogy

Praise for IT’S KIND OF A FUNNY STORY: “This book offers hope in a package that readers will find enticing, and that’s the gift it offers.”
— Booklist (starred review)

Praise for IT’S KIND OF A FUNNY STORY: “A well-paced narrative...filled with humor and pathos.”
— School Library Journal

Praise for IT’S KIND OF A FUNNY STORY: “This is an important book.”
— New York Times Book Review