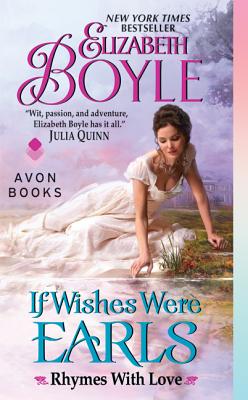 If Wishes Were Earls

Harriet Hathaway has only ever wanted one man: the Earl of Roxley. After a passionate interlude at a house party, Harriet is convinced Roxley will do the right thing and propose. But when she returns to London, she finds the roguish earl on the verge of proposing to another.

Yet Harriet refuses to believe that her hopes of a happily-ever-after are completely lost—for she can see the desire still flickering in the earl’s eyes when he looks at her from across the dance floor. And when they are alone . . . there is one wish neither can deny.

. . . the most extraordinary things can happen

The Earl of Roxley is in a dangerous fix—and to keep Harriet safe, he must hold her at arm’s length. He won’t entangle her in the murderous mystery that is threatening to destroy his family and his future. But keeping Harriet Hathaway out of his troubles proves as impossible as it is to keep the determined beauty from stealing his heart.


Praise For If Wishes Were Earls: Rhymes With Love…

“Written with a quirky sense of humor that spills onto nearly every page, If Wishes Were Earls is a madcap story that will entertain anyone who has enjoyed the previous books... [A] light-hearted and amusing tale.”
— Historical Novel Society on IF WISHES WERE EARLS

Elizabeth Boyle has always loved romance and now lives it each and every day by writing adventurous and passionate stories that readers from all around the world have described as “page-turners.” Since her first book was published, she’s seen her romances become New York Times and USA Today bestsellers and has won the RWA RITA® and the Romantic Times Reviewer’s Choice Awards. She resides in Seattle with her family, her garden, and her always-growing collection of yarn. Readers can visit her at www.elizabethboyle.com, or follow her own adventures on Twitter, Facebook, and Instagram.  www.avonromance.com www.facebook.com/avonromance