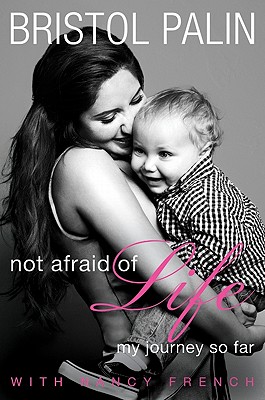 Not Afraid of Life (Hardcover)

My Journey So Far

When her mother, Sarah Palin, became the Republican Vice-Presidential candidate in 2008, Bristol Palin was instantly propelled into the national spotlight, becoming the focus of intense public and national media scrutiny at the age of seventeen. In Not Afraid of Life, she shares with readers for the first time ever personal moments from her life—from her Alaskan roots to her pregnancy and single motherhood to her star turn on TV’s enormously popular Dancing with the Stars. This candid memoir is a heartfelt true story of a woman who is centered by her strong Christian faith and is Not Afraid of Life.

Bristol Palin appeared on ABC-TV’s Dancing with the Stars, where she reached the finals and ultimately placed third. She frequently speaks in front of groups across the country, where she focuses on inspirational and pro-life topics.

Nancy French is the author of Home and Away: A Story of Family in a Time of War and Red State of Mind: How a Catfish Queen Reject Became a Liberty Belle. She is also the editor of SixSeeds.tv, a pop culture-focused magazine for parents, and lives in Tennessee with her husband and three children.


Praise For Not Afraid of Life: My Journey So Far…

“She writes convincingly, and humbly, of how she was able to move beyond her feelings of shame and Hester Prynne-like social ostracism.”
— Washington Post
or
Not Currently Available for Direct Purchase
Copyright © 2020 American Booksellers Association