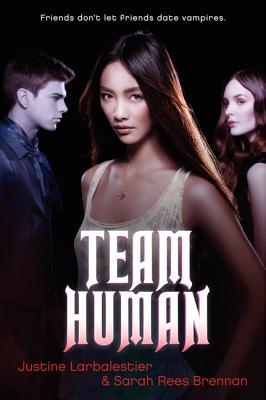 Readers who love vampire romances will be thrilled to devour Team Human by Justine Larbalestier and Sarah Rees Brennan. Team Human celebrates and parodies the Twilight books, as well as other classics in the paranormal romance genre.

Mel is horrified when Francis Duvarney, arrogant, gorgeous, and undead, starts at her high school. Mel’s best friend, Cathy, immediately falls for the vampire. Cathy is determined to be with him forever, even if having him turn her could inadvertently make her a zombie.

And Mel is equally determined to prove to her BFF that Francis is no good, braving the city’s vampire district and kissing a cute boy raised by vampires as she searches evidence in this touching and comic novel.

The authors both uphold the conventions of the contemporary vampire romance and comment on it.
— Voice of Youth Advocates (VOYA) (starred review)

Smart and entertaining. Themes of honest friendship and freedom of choice mix with zombies, accidental romance, a diverse and complex cast, and sharply funny dialogue to create a thoroughly enjoyable read with a core of unexpected depth.
— Publishers Weekly (starred review)

Team Human is both fearsome and funny, a fresh entry in the popular genre.
— The Horn Book

A witty, comedic parody that adds a fresh idea to the teen vampire novel trend.
— Booklist

The perfect blend of humor, heart, brains (braaaaaaaainssss?) and thrills.
— Bulletin of the Center for Children’s Books

A witty story of friendship that has a poignancy that is rare, coupled with a dry humor that is truly laugh-out-loud funny.
— School Library Journal

No matter what team you’re on, there are characters here you’ll cheer for. Suspense, humor, and romance: Team Human has it all!
— Claudia Gray, New York Times bestselling author of Evernight

I could not be more a fan of this book than if I had a TEAM HUMAN cheerleader outfit ... brilliant, funny, sharply emotional!
— Rachel Caine, New York Times bestselling author of the Morganville Vampire

Justine Larbalestier is the author of Liar, How to Ditch Your Fairy, and the Magic or Madness trilogy, as well as the coeditor with Holly Black of Zombies vs. Unicorns. She and her husband, author Scott Westerfeld, divide their time between Sydney, Australia, and New York City.

Sarah Rees Brennan was born and raised in Ireland. After earning her master's in creative writing in New York and doing library work in Surrey, England, she has returned to Dublin, Ireland, to write. She is the author of the novels The Demon's Lexicon, The Demon's Covenant, and The Demon's Surrender, and her short story "Let's Get This Undead Show on the Road" appears in the collection Enthralled: Paranormal Diversions.