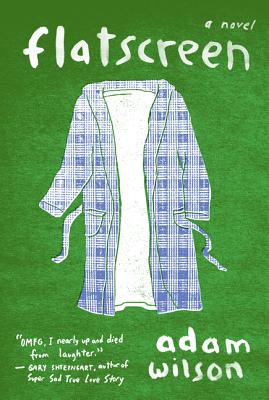 “Reading Flatscreen in public without cracking up was a challenge, one that I did not meet, and I frequently looked like a crazy person reading the book. Wilson balances heartbreak with humor in a way that is affecting and real. In the books, we meet Eli Schwartz, college dropout, failed Hebrew, and culinary master. Eli's struggle to assert himself in a digitized world as a fleshed-out man is as frighteningly real as it is funny. Eli longs for what all tewenty-somethings long for -- a sense of belonging, to be loved, and perhaps, to be worshiped. Flatscreen is a treasure. Bravo, Mr. Wilson!”
— Zach Sampinos, Weller Book Works, Salt Lake City, UT
View the List

“OMFG, I nearly up and died from laughter when I read Flatscreen. This is the novel that every young turk will be reading on their way to a job they hate and are in fact too smart for.” —Gary Shteyngart, author of Super Sad True Love Story


Indie-lit star and Faster Times editor Adam Wilson delivers the gleefully absurd, effortlessly heartwarming story of one young man’s struggle to shake off the listless, sexless, stoned mantle of suburban teenage life and become something better. Fortunately (maybe) for Eli, his apathetic quest finds a catalyzing agent in one Mr. Seymour J. Kahn, a paraplegic sex addict and two-bit silver screen star who initiates a mad decent into debasement and (of course) YouTube stardom—a transformation from which there will be no going back.

Praise For Flatscreen: A Novel…

“Wilson’s prose is original and arresting … he approaches, in his loftier moments, the tortured grace of George Saunders. This is Cheever on Xanax, or maybe lithium, but the voice is still there; sardonic, hilarious, and very much of our time. Wilson is a writer to watch.” — Daily Beast

“If you smashed The Catcher in the Rye into Jesus’ Son, you might have something quite close to Flatscreen, a narrative of wayward youth for our beguiled new century on the brink of a discovery we might not welcome.” — BookForum

“Wilson gives us something depressingly hilarious and undeniably real....Low-level angst is still angst, and Wilson captures it perfectly.” — Time Out New York

“Perverse, subversive, and hilariously outrageous, the book delivers memorable characters, a rollicking plot, and a new voice that comes across as anything but flat.” — Barnes and Noble Review

“Wilson expertly crafts explosively hilarious scenes ranging from a Viagra/Oxycontin/cocaine-driven meltdown during a high school football game to the complete destruction of what might have been a reasonably pleasant Thanksgiving dinner with family and friends.” — Forward

“Wilson pulls you in with smart, self-deprecating comedy, and you never see the sting that’s coming. Through the seemingly-familiar prism of a disaffected young man wandering through his Massachusetts hometown, Wilson examines questions of class, intimacy, and our relationship to the media that surrounds us every day.” — L Magazine

“Sure, it’s another chubby stoner loser protagonist who is forced to turn into a real person when he gets irritating real-world problems dumped on his lap, but Adam Wilson does it with special aplomb.” — Flavorwire

“An auspicious debut that promises, in Wilson, a standout addition to a new generation of writers.” — Booklist (starred review)

“Rollicking…Comedy and pathos abound in Seymour’s absurdist world, and in Eli’s fantasies of a better life that come in the form of hilariously familiar cinematic scenarios in which, for instance, the screwup becomes the star chef. Fans of Jack Pendarvis and Sam Lipsyte will enjoy Wilson’s fresh, fantastical perspective…” — Publishers Weekly

“Flatscreen is a bleakly funny and totally outrageous debut from an exciting new writer. Adam Wilson has written the slacker novel to end all slacker novels.” — Tom Perrotta

“OMFG, I nearly up and died from laughter when I read Flatscreen. This is the novel that every young turk will be reading on their way to a job they hate and are in fact too smart for.” — Gary Shteyngart

“Adam Wilson delivers rapid fire prose that is distinctively intelligent, hilarious, artful, and perverse. While never failing to entertain, Flatscreen stealthily exposes the psychic abyss that haunts every fit of laughter. A dark jewel of a book.” — Heidi Julavits

“Flatscreen is the sort of novel we’ve heard nobody is able to write anymore: erudite and hilarious, raunchy and topical, and flat-out fun. Nicholson Baker meets Barthleme with a dash of Nabokov….[B]uy this altogether magical book.” — Darin Strauss

“Adam Wilson struts into that dark destination of post-high-school misery and emerges with a story full of energy and hilarity and emotion. What a great read!” — Deb Olin Unferth

“Adam Wilson is a gutsy, funny, and often beautiful writer, and Flatscreen is one of the most hilarious and commanding debuts I’ve read in a long time.” — Sam Lipsyte

“[Wilson’s] prose is relentless, and his world view is on fire. Flatscreen is a wickedly funny, absurdly engaging debut. I’d recommend it for fans of Sam Lipsyte and anyone looking for an unconventional coming-of-age story.” — Jami Attenberg

Adam Wilson is the author of the novel Flatscreen (Harper Perennial, 2012). His fiction has appeared in many publications including The Paris Review, The Best American Short Stories, Tin House, The Literary Review, The New York Tyrant, Gigantic, and many others.

He is currently a regular contributor to both BookForum and The Paris Review Daily. His essays have appeared in The New York Times, The New York Observer, Time Out New York, and elsewhere.

Adam holds a BA from Tufts University and an MFA from Columbia University. A former employee of Brooklyn's famous BookCourt bookstore, he now teaches creative writing at NYU and The Sackett Street Writer's Workshop. He lives in Brooklyn with his cat.