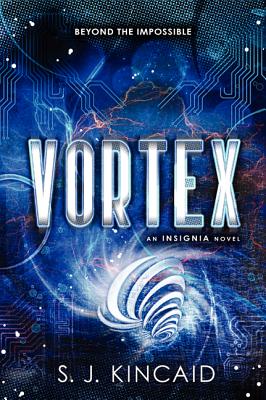 S. J. Kincaid has created a fascinating dystopian world for Insignia, her futuristic science-fiction adventure series perfect for fans of Ender's Game. Earth is in the middle of WWIII, a war to determine which governments and corporations will control the resources of the solar system.

Teen Tom Raines grew up with nothing—some days without even a roof over his head. Then his exceptional gaming skills earned him a spot in the Intrasolar Forces, the country's elite military training program, and his life completely changed.

Now in Vortex, the second book in the series, Tom discovers that the Pentagonal Spire, where he and his friends are being trained as superhuman weapons, is filled with corruption. He is asked to betray his friends—the first real friends he's ever had—for the sake of his country.

Will he sacrifice his new life to do what he believes is right?

“Kincaid lays a lot down, twining her increasingly complex plot and characterizations with Tom’s growing awareness. Action fans, fear not: For all the deep thinking Tom and readers undertake, pace, adventure and fun are not compromised one whit. A surprisingly and satisfyingly rich middle volume.”—
— Kirkus Reviews (starred review)

“Readers...will enjoy the action of this installment and will eagerly anticipate the next.”
— School Library Journal

PRAISE FOR INSIGNIA: “Insignia expertly combines humor with a disarming and highly realistic view of the future. The characters are real, funny, and memorable. You won’t be able to put this book down.”
— Veronica Roth, #1 New York Times bestselling author of DIVERGENT and INSURGENT

“Hip, high-tech, and hilarious, INSIGNIA made my heart soar and left me with impossible-to-shake questions about technology, reality, and war.”
— Rae Carson, author of THE GIRL OF FIRE AND THORNS

“Kincaid combines a Harry Potter-like teen discovering that he has unknown abilities being sent to a special boarding school with the Ender’s Game plotline of humanity’s space battles being fought remotely by juveniles. She adds espionage, corporate skullduggery and multiple mysterious enemies to create a blockbuster of a debut.”—
— School Library Journal (starred review)

“Fast-paced battles in a variety of virtual worlds will excite gamers of all levels... Insignia [will] make a popular series for readers who enjoy adventures, science fiction, and espionage.”
— Voice of Youth Advocates (VOYA)

“An unlikely teen is selected to attend Hogwarts-at-the-Pentagon. With action, real humor and a likable, complex protagonist, this fast-moving, satisfying adventure also provides some food for thought.”
— Kirkus Reviews