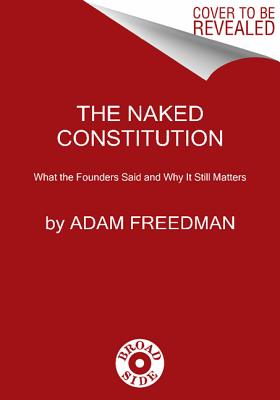 What the Founders Said and Why It Still Matters

In the spirit of Glenn Beck's Original Argument comes a lively manifesto on the need to recover the original meaning of the Constitution.

From law school classrooms to the halls of Congress, America's elites have come to regard the Constitution as a mere decorative parchment to be kept under glass at the National Archives. In The Naked Constitution, conservative legal scholar Adam Freedman defends the controversial doctrine of originalism as the only way to restore the Founding Fathers' vision of American liberty. Freedman argues that the fashionable "Living Constitution" theory has been used by judges and politicians since the Progressive Era of the early 1900s to centralize power in Washington and to threaten individual freedom.

The Naked Constitution explains the fundamental themes animating America's founding charter: limited government, federalism, separation of powers, and individual liberty. Freedman explores the nature of each of the three branches of government as well as the key individual rights enshrined in the Constitution to show how original meaning can help answer the most pressing questions facing America today: Can the president invade another country without the approval of Congress? Can he assassinate or spy on American citizens in the name of fighting terror? Do corporations have the same "free speech" rights as individuals? Can the federal government coerce states to adopt particular policies, or force individuals to buy insurance? Ultimately, Freedman calls for a new constitutional convention that will free the nation from capricious courts and idiosyncratic judges, and limit the growth of government for decades to come.