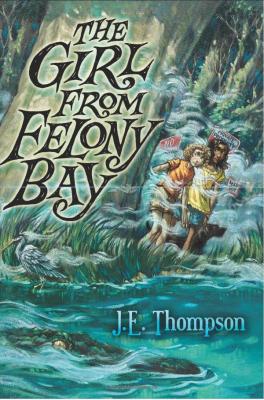 The last year has been rougher than sandpaper for Abbey Force and her dad. He’s in a coma after his accident a year back, wherein he was framed for a terrible crime he didn’t commit. And their home, Reward Plantation, an idyllic spot on the eastern coast of South Carolina, had to be sold to pay off his debt to society. Abbey is stuck living with her uncle Charlie, who, even in the few hours a day when he’s sober, ain’t exactly your ideal parental role model.

But it turns out the new family that moved into Abbey’s old house has a daughter named Bee. And she’s just as curious about all the No Trespassing signs and holes being dug out by Felony Bay, in the corner of what used to be Abbey’s home. It appears someone’s been poking around a mystery that dates all the way back to the Civil War—and it just might be the same someone who framed Abbey’s dad.


Praise For The Girl from Felony Bay (Felony Bay Mysteries #1)…

“A tale bursting with intrigue and adventure finds its setting deep in the South Carolina Lowcountry. A successful turn by a promising new author.”
— Kirkus Reviews

“A character in itself, the South Carolina setting is fully realized with the danger and beauty of its swampy backwoods a factor in every chapter. Future fans of Grisham will find this immensely satisfying, as will readers who were enchanted by Turnage’s Three Times Lucky.”
— Bulletin of the Center for Children’s Books

“The story never forgets that at its center is a little girl who has lost everything and is more determined than even Nancy Drew.”
— Booklist

“The Girl from Felony Bay is a lovely story. J.E. Thompson has created a wonderful, honest character with a pitch-perfect young girl’s voice. Abbey Force’s tale will draw any reader in as she unravels long-buried mysteries and struggles to come to terms with the South’s dark past.”
— Katie Crouch, New York Times bestselling author of Girls in Trucks

“I was enthralled by this tale. It’s lyrical, touching, and beautifully written. A great debut.”
— Bernard Cornwell, author of The Winter King

J. E. Thompson is the author of The Girl from Felony Bay along with a number of books for adults. He lives in Charleston, South Carolina, not too far from the bays and plantations that inspire the Felony Bay Mysteries.