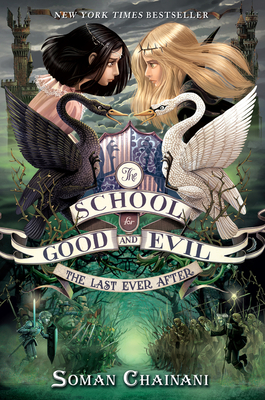 The School for Good and Evil #3

The Last Ever After

In the riveting third installment of the New York Times bestselling School for Good and Evil series, everything old is new again, as Sophie and Agatha fight the past as well as the present to find the perfect end to their fairy tale.

Former best friends Sophie and Agatha thought their ending was sealed when they went their separate ways, but their storybook is about to be rewritten—and this time theirs isn't the only one. With the girls apart, Evil has taken over and the forces of Good are in deathly peril.

Will Agatha and Sophie be able to work together to save them? Will they find their way to being friends again? And will their new ending be the last Ever After they've been searching for?

Soman Chainani delivers action, adventure, laughter, romance, and more twists than ever before in this extraordinary chapter of his epic series.

Don't miss the thrilling conclusion to the beloved series, The School for Good and Evil #6: One True King!

Soman Chainani is the New York Times bestselling author of the School for Good and Evil series. The fairy-tale saga has sold over 3 million copies, been translated into 30 languages, and will soon be a major motion picture from Netflix, which Soman will executive produce. His most recent book, Beasts and Beauty: Dangerous Tales, was also an instant New York Times bestseller.

Soman is a graduate of Harvard University and received his MFA in film from Columbia University. Every year, he visits schools around the world to speak to kids and share his secret: that reading is the path to a better life.

You can visit Soman at www.somanchainani.com.