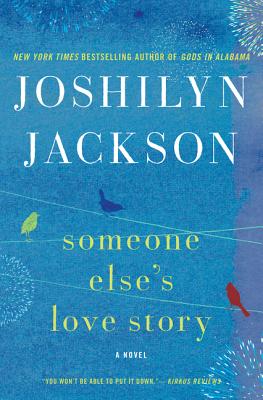 “Witty, cleverly constructed and including a truly surprising twist, Someone Else’s Love Story turns out to be a nuanced exploration of faith, family and the things we do for love.”
— People (3 ½ stars)

“Witty and insightful...a novel at once funny and touching.”
— Publishers Weekly

“An inspiring story of love, faith and redemption...All of the characters... are so vividly drawn, they fairly leap off the page.”
— Booklist on SOMEONE ELSE'S LOVE STORY

“That rare woman’s novel that is sure to please readers of popular fiction as well as literary fiction. A terrific pageturner!”
— Susan Elizabeth Phillips, New York Times bestselling author of THE GREAT ESCAPE

“Someone Else’s Love Story is worth reading, even studying. Expressions of love come in many forms, as Jackson shows.”
— Omaha World-Herald

“Finely drawn characters make the miraculous plausible, from the opening hostage scene in a North Georgia convenience store to an ending that hits the mark of ‘surprising yet inevitable’ mastered and articulated by Flannery O’Connor.”
— Atlanta Magazine

“A surprising novel, both graceful and tender. You won’t be able to put it down.”
— Dallas Morning News on SOMEONE ELSE'S LOVE STORY

“ Someone Else’s Love Story is never predictable, full of humor and heart and characters you can’t help but love.”
— Greenville News

“Joshilyn Jackson is a brilliant storyteller and has a unique gift of bringing quirkiness to her characters and a lot of twists and turns to her tale.”
— Wichita Falls Times Record Review

“There are scenes that will make you gasp, pause or even tear up as Jackson’s characters fumble toward imperfect enlightenment. Someone Else’s Love Story will delight and surprise with its unexpected compassion, empathy and humanity.”
— BookPage

“This charming page-turner serves up a twist I never remotely expected, followed by an utterly satisfying conclusion.”
— Bookreporter.com

What does the title tell you about the story? What do we learn from the first line? How does the book’s opening set the stage for the events that follow?

“That afternoon in the Circle K, I deserved to know, right off, that I had landed bang in the middle of a love story. Especially since it wasn’t— it isn’t— it could never be, my own. ” Why could this story never be Shandi’s? If it’s not hers, than whose love story is it?

Everyone sees William as a hero for his acts during the robbery. How does William answer this? Would you call it brave? Why did Shandi have such faith that William would save them?

Destiny and choice are major themes in the novel. What does destiny mean to William? What about Shandi?

Shandi and Walcott have known each other forever. Discuss their relationship. How is it transformed? Why do we often miss the obvious in our lives?

How do the religious references sprinkled through the story–Natty’s virgin birth for example–add a deeper level of flavor and meaning to the book?

Why is William angry with Bridget and not her “imaginary God”? When bad things happen most people blame God. Why? Why doesn’t William?

How does their meeting change both William and Shandi? Would you call their meeting fate or destiny or maybe a miracle? “It isn’t every day he meets a girl who killed a miracle,” William thinks when he agrees to help Shandi. Why does her having “killed” a miracle so intrigue him?

How do each of these characters’ certainties and beliefs change when they are confronted by unexpected circumstances–the robbery, the fireworks, the DNA results, meeting Natty’s father for example?

The possibility of goodness and forgiveness are also themes in the book. Talk about how they are demonstrated in various characters’ lives and experiences.

How many different kind of love stories are in the book? How do they all intertwine?

We’re you surprised at the ending? Was it exactly what should happen for all the characters?