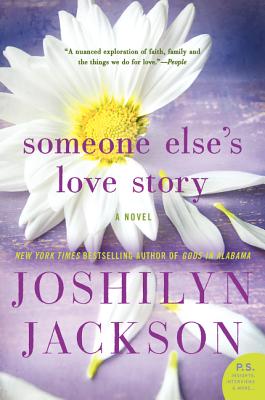 “Witty, cleverly constructed and including a truly surprising twist, Someone Else’s Love Story turns out to be a nuanced exploration of faith, family and the things we do for love.” — People (3 ½ stars)

“Witty and insightful...a novel at once funny and touching.” — Publishers Weekly

“An inspiring story of love, faith and redemption...All of the characters... are so vividly drawn, they fairly leap off the page.” — Booklist on SOMEONE ELSE'S LOVE STORY

“That rare woman’s novel that is sure to please readers of popular fiction as well as literary fiction. A terrific pageturner!” — Susan Elizabeth Phillips, New York Times bestselling author of THE GREAT ESCAPE

“Someone Else’s Love Story is worth reading, even studying. Expressions of love come in many forms, as Jackson shows.” — Omaha World-Herald

“Finely drawn characters make the miraculous plausible, from the opening hostage scene in a North Georgia convenience store to an ending that hits the mark of ‘surprising yet inevitable’ mastered and articulated by Flannery O’Connor.” — Atlanta Magazine

“A surprising novel, both graceful and tender. You won’t be able to put it down.” — Dallas Morning News on SOMEONE ELSE'S LOVE STORY

“ Someone Else’s Love Story is never predictable, full of humor and heart and characters you can’t help but love.” — Greenville News

“Joshilyn Jackson is a brilliant storyteller and has a unique gift of bringing quirkiness to her characters and a lot of twists and turns to her tale.” — Wichita Falls Times Record Review

“There are scenes that will make you gasp, pause or even tear up as Jackson’s characters fumble toward imperfect enlightenment. Someone Else’s Love Story will delight and surprise with its unexpected compassion, empathy and humanity.” — BookPage

“This charming page-turner serves up a twist I never remotely expected, followed by an utterly satisfying conclusion.” — Bookreporter.com