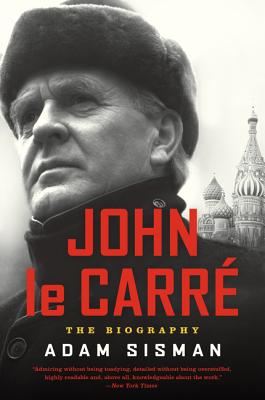 The definitive biography of the internationally adored author of The Spy Who Came in from the Cold, Tinker Tailor Soldier Spy, and A Perfect Spy—arguably one of the most important and influential writers of the post-World War II period—by the National Book Critics Circle Award-winning biographer Adam Sisman.

In this definitive biography—blessed by John le Carré himself—Adam Sisman reveals the man behind the bestselling persona. In John le Carré, Sisman shines a spotlight on David Cornwell, an expert at hiding in plain sight—“born to lying,” he wrote in 2002, “bred to it, trained to it by an industry that lies for a living, practiced in it as a novelist.”

Of course, the pseudonym “John le Carré” has helped to keep the public at a distance. Sisman probes Cornwell’s unusual upbringing, abandoned by his mother at the age of only five and raised by his con man father (when not in prison), and explores his background in British intelligence, as well as his struggle to become a writer, and his personal life. Sisman has benefited from unfettered access to le Carré’s private archive, talked to the most important people in his life, and interviewed the man himself at length.

Who is John le Carré? Intriguing, thorough, and packed with entertaining detail, this biography will be a treat for the legions of le Carré fans.

“What could have been a cloying hagiography or a lurid warts-and-all exposé is instead a balanced, focused and compelling study of a man of depth and individuality… This biography expertly shows how distance, distrust and even disillusionment have informed Mr le Carré and influenced his bestselling fiction.”
— The Economist

“In John le Carré: The Biography, Mr. Sisman creates an insightful and highly readable portrait of a writer and a man who has often been as elusive and enigmatic as his fictional heroes.”
— Michiko Kakutani, New York Times

“Loose threads are what fascinate most about Adam Sisman’s biography of David Cornwell, who at 84 still writes and publishes knotty, brainy thrillers under the pseudonym John le Carré…Best of all, Sisman provides aficionados of le Carré‘s fiction with canny assessments of, and inside information on all his written work.”
— USA Today

“The major themes of Adam Sisman’s meticulously researched John le Carré: The Biography are twofold: the desperate search for love and artful self-invention through spying and writing fiction . . . . [the book] is unfailingly engrossing.”
— San Francisco Chronicle

“Admiring without being toadying, detailed without being overstuffed, highly readable and, above all, knowledgeable about the work. . . . Sisman is the kind of thorough, serious writer who inspires trust...and what we take away is a new appreciation of le Carré‘s full range.”
— Joseph Kanon for The New York Times Book Review

“It is a disappointment to reach the end of John le Carré which is admirably scholarly.”
— Wall Street Journal

“Sisman has written an admirable biography. It’s at its best when recounting...David’s struggles to escape from his father’s malign influence and find purpose in life, which he did when the worldwide success of his third novel...liberated him to write full time.”
— The Financial Times

“John le Carré shows us that the novelist’s real life is just as fascinating as those le Carré depicts in his novels…There’s a con-artist, larger-than-life father; a destructive, blockbuster affair with a good friend’s wife; dust-ups with publishers; and tetchy relationships with various movie stars.”
— The Oregonian (Portland)

“A fascinating [and] superb biography, bristling with fresh insights.”
— BBC.com

“A talented biographer brings the great spy novelist in from the cold.”
— Washington Independent Review of Books

“The definitive [authorized!] biography of the internationally adored author of “Tinker Tailor Soldier Spy”-arguably one of the most important and influential writers of the post-World War II period-by the National Book Critics Circle Award-winning biographer Adam Sisman.”
— My Edmonds News (Seattle, WA)