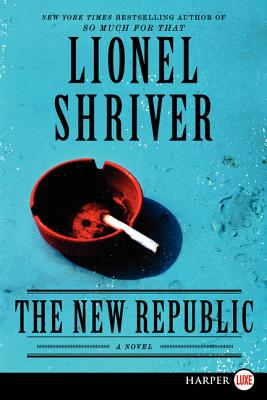 Acclaimed author Lionel Shriver—author of the National Book Award finalist So Much for That, The Post-Birthday World, and the vivid psychological novel We Need to Talk About Kevin, now a major motion picture—probes the mystery of charisma in a razor-sharp new novel that teases out the intimate relationship between terrorism and cults of personality, explores what makes certain people so magnetic, and reveals the deep frustrations of feeling overshadowed by a life-of-the-party who may not even be present.

“Shriver is a master of the misanthrope. . . . [A] viciously smart writer.” —Time

Lionel Shriver's novels include The New Republic, So Much for That, The Post-Birthday World, and the international bestseller We Need to Talk About Kevin. Her journalism has appeared in The Guardian, the New York Times, the Wall Street Journal, and many other publications.


Praise For The New Republic: A Novel…

“[Shriver’s] whip-smart observations—about relationships, the role of the media, the cult of personality are funny and on the mark.”
— People

“In her latest novel, Lionel Shriver pays homage to Joseph Conrad—examining terrorism, media bloodlust, and the cult of personality through an unexpected lens of satire.”
— Marie Claire, Four New Page-Turners to Keep Bedside

“A very funny book, but the laughs are embedded in a deeply disturbing subject.”
— NPR, "Weekend Edition"

“Shriver is cursed with knowing the human animal all too well. The New Republic is satire of a Shriver kind, that is to say biting.”
— Miami Herald

“Lionel Shriver, the author of the harrowing and patient We Need to Talk About Kevin, delivers something altogether different: a callous and romping political and journalistic satire.”
— The Daily Beast-- This Week's Hot Reads

“Shriver is one of the sharpest talents around.”
— USA Today

“Witty, caustic and worldly, [Shriver] is a raconteur who could show even Barrington Saddler a thing or two about entertaining a crowd.”
— Wall Street Journal

“The dialogue zings and the writing is jazzy. . . . [Shriver] can toss off a sharp sketch of a passing character in a phrase, and she’s got a gimlet eye for what’s phony, or affected, or even touchingly vain in human behavior.”
— Entertainment Weekly

“Shriver is an incisive social satirist with a clear grip on the ironies of our contemporary age . . . [Her] take on journalism and international politics is wry, insightful and just over the top enough to be fun.”
— Los Angeles Times

“Part Scoop, part Our Man in Havana and part Len Deighton thriller, Shriver’s novel is not just about terrorism but also about journalism and the nature of charisma. . . . Shriver’s Barba is a wonderful creation.”
— Financial Times
or
Not Currently Available for Direct Purchase
Copyright © 2020 American Booksellers Association